Now that the holidays are over, I've found myself back in my craft room. I've done some card making, and I've finally finished a couple of new layouts.  I haven't done much scrapbooking in the last couple of months and it was difficult to get back into the groove.  Here's two layouts that I recently finished: 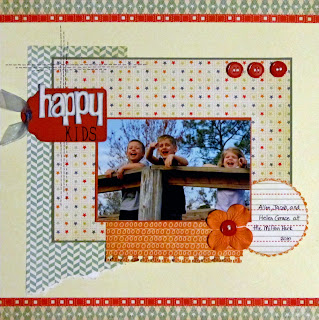 I used a sketch from Pagemaps for this first layout.  I needed something to get my creative mind moving again.  The photo was taken at a local park this past fall.  These three were having a great time running and playing...and if I'm not mistaken, they were making fun of the photographer (me) at the time the picture was snapped! The papers I used for this layout are from My Mind's Eye - Alphabet Soup Collection.  I used a few buttons, cut the tag with a Coluzzle template, and punched the orange border with an EK Success punch.  The title letters are chipboard and rubons.  I didn't have ribbon to match the papers, so I improvised by coloring some white, sheer, sparkly ribbon with a Copic marker that matched.  The "stitching" in the upper left corner was done with a black pen.  The top and bottom borders are just strips of paper adhered to the background paper. 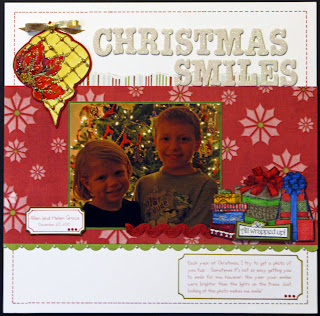 This layout was created with the I Believe Collection from My Mind's Eye.  I took this photo of Allen and Helen Grace just a few days before Christmas.  The stack of presents are three different stamps from Flourishes called All Wrapped Up  I colored each stamped image with Copic Markers, then put a light coat of Glimmer Glaze (Tim Holtz).  I used foam tape to mount the presents to the layout to give it a little dimension.
The ornament at the top left was made by stamping the poinsettia on white card stock with black Memento ink.  I colored the poinsettia and then colored around it with a soft yellow Copic marker.  I cut the ornament out with the Spellbinder Ornament die (the next to the large one).  Then I added a hatch work of glue and sprinkled with glitter.  I also added a little glitter to the poinsettia and some glossy accents.  Before the glossy accents dried, I added some small beads to the center of the poinsettia.  After all the glitter and glossy accent was dried, I added a flat-back gold pearl to the intersections of the lines.  Then I matted the ornament with red paper and used foam tape to add it to the layout.  It was a lot of work, but I loved the end result.
The green border across the bottom of the red was punch with an EK Success border punch.  The journaling was printed on white card stock.  I punch the corners with a ticket punch, added a small gold border with a gold metallic pen and then added three tiny red flat-back pearls to the bottom.  I also added pearls to the name plate by the photo.
Title letters are white, glittery Thickers.  After looking at the layout for a little while, I decided that a "stitched" border would be the perfect finishing touch...and I love the way it ties everything together.  BTW....the black border around the layout was just added digitally so that the white background of the layout didn't fade away.
Only one small mishap while scrapping yesterday.  When I was opening the little jar to get the beads out for the poinsettia ornament, I opened it upside down and spilled beads everywhere!  I'll be cleaning up beads for months to come, I'm sure!  Thank goodness I didn't spill ALL of them! LOL!
That's all for today. Thanks so much for stopping by! Until next time...
Hugs!
﻿

Wonderful layouts - I like that the journalling is as important as the photo's. Ooops with all those beads - it makes an impressive sound in the vaccuum cleaner doesn't it, when they are sucked up! Please check back at my blog - there is a blog award.

These are absolutely GORGEOUS Susan!! I hope you are able to get those beads all found!

Hey Susan! Long time no hear, Hope all is well. Love your layouts:)