The Less is More challenge this week is to make a card(s) using punches or die cuts.  Wow...how simple is that!  After last weeks efforts to make a card with stripes, this one should be so simple!  I have tons of punches...and dies...what to do...what to do??!
To go off on a side note for a minute...  Usually, when I make cards for a challenge, I attempt to make a card that I know I will use soon or at least in the near future.  Somehow, I've managed to accumulate quite a stash of cards and I'm fairly certain that I'll never use all of them...and I keep making them too!  So, I asked my daughter-in-law who works as a social worker at a nursing home, if the people at the nursing home would be able to use some of these cards.  She was so excited to get them and assured me that everyone would be thrilled to have some cards to send out!  My cleaning up of my craft room accomplished two things...I got my room clean and thinned down the number of cards I have on hand...and I provided some cards to people who don't have the ability to go to the store to buy cards!  Makes me happy! 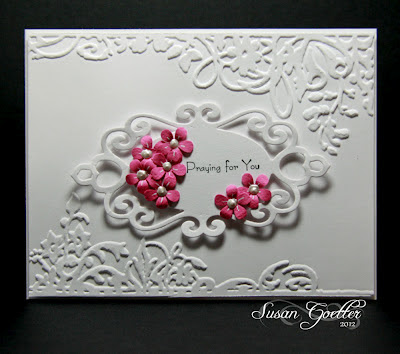 I made this first card using a white card base.  I embossed a white piece to pop over the front of the card.  The tag is a Spellbinder die that I also pop dotted on top of the embossed piece.  The flowers are punches and I added a liquid pearl center to each flower as well as a little white doodling.  The sentiment is from a very old stamp I had in my stash (I think it is SU).  Made this card for a friend who had open heart surgery this week.  Very simple...with just a pop of color...and I used a die and a punch! 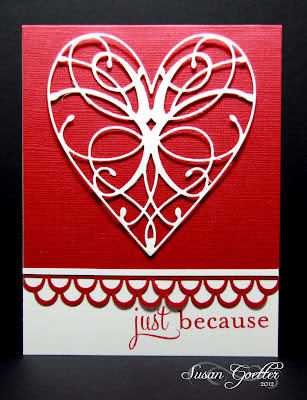 This next card was made using a heart die from Memory Box.  When I ordered the die, I had no idea it was so large.  I don't know if it's just my cuttlebug, but I have a lot of trouble getting the Memory Box dies to cut all the way through.  Seems like I have to run it through my machine 4 or 5 times and use shims to get a clean cut.  I used a red card base, then cut off the front of the red and used a punch for the scalloped border.  I added a layer of white behind the red and stamped the PTI sentiment on the white in SU Real Red.  The heart is pop dotted (and that was difficult since the cuts are so thin!).  I also added a strip of white paper just above the red scalloped edge...it just needed something there! 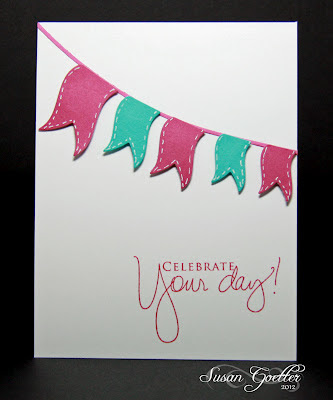 This card was super quick and simple.  The banners are Lifestyle dies as is the line they are hanging from.  I pop-dotted each of the flags and added a touch of white faux stitching to each of the banners.  The sentiment is from PTI. 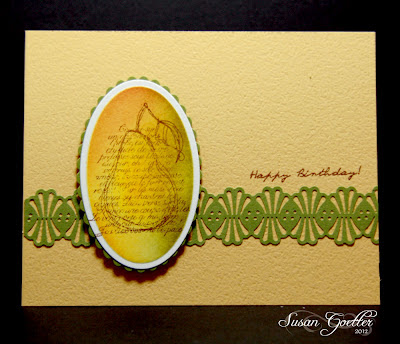 This last card is one I made just because I wanted to used the new SU pear stamp! LOVE this stamp!!  I also wanted to try to make a border with a punch, and I used a MS border punch for this border.  I simply cut a one inch strip and punched down either side of it.  I see I was slightly off...but I'll try not to stress over it! LOL! I stamped the pear with Memento cocoa brown, then cut it out with an oval Spellbinder die.  While it was still in the die, I sponged it with DIs.  I cut a scalloped oval with the same size Spellbinder die in green and used it to back the oval die cut.  The sentiment is from PTI and was stamped in the same brown.  The card base is a yellow...not nearly as gold as it looks here.
Thought I'd share a layout too...This one is a photo of my hubby and his two younger brothers...taken sometime around 1950. 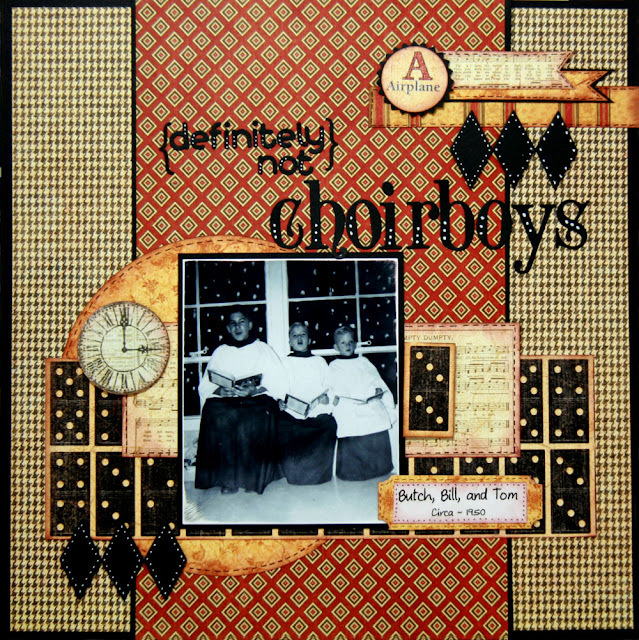 I used a mix of G45 papers (A proper gentleman, Times Nouveau, Playtimes Past, and Botanicabella). I think they all blend together well. Title work was cut with QK - Fiesta and Lemonade. The diamonds were also cut with a QK die. I added lots of doodling and did quite a bit of layering. Journaling is tucked behind the photo with the domino as a pull and reads:

The three Goetter boys…all dressed up in their choir robes, singing and posing for a photo. I don’t know for sure, but based on the stories I’ve been told…these three were definitely NOT choirboys!
Whew...are you still hanging in there?  Thanks a million for stopping by! I truly appreciate all you comments! Until next time...
Hugs!

Brilliant post Susan and absolutely fabulous cards. I'm so glad you found an outlet for your unsent cards.
These are all just gorgeous!
Thanks so much
Chrissie
"Less is More"

Hi Susan
All your cards are brilliant but my favourite is the bunting. Love the scrapbook page of your husband and his brothers, I bet they were a handful!

Your cards are so so wonderful. Thanks for sharing them: great inspiration. The layout is fabulous and your title is hilarious.

Gorgeous cards. I particularly like the first one - so elegant.
Anne x

All your cards are fantastic. You have found a wonderful way to share your unused cards.
Yvonne x

i always love coming to your blog susan to see how many wonderful cards you have made for the LIM challenge. my favorite is the first one... but they are all fantastic! fabby layout, too!

Whew, Susan, you've been busy! First of all, a nursing home is a wonderful place to donate cards to. I sent some Christmas cards to my Dad to give out at Christmas and he was more excited about that than the gifts. On to the cards. I love all the embossed and die cut white on the first with just a pop of color. The Memory Box heart is gorgeous! Aren't they just the prettiest dies? Your pennants swinging in the breeze are so festive and I love the way you colored your pear. Now those boys look so innocent. I wonder what they were singing?!

Wow, no wonder you've built up such a stash you're always so prolific!! These are all so gorgeous but I just adore the one with the banners - its so cute and so effective but so simple too.
Super layout too - they look like 3 proper little angels ;-)
Tara x

Another amazing set of cards Susan! Love the first one, those flowers just make it pop! I know what you mean about cutting the dies cleanly and thought you could check this out:
http://www.cheerylynndesigns.com/products/Cuttlehug_Large_Metal_Adaptor_Plate-645-9.html
My sister told me about it and finds it cuts through perfectly. You use it instead of shims.
Val x

An amazing array of fabulous creations!!! LOVE that first one--white on white with a pop of pink--it's amazing! :)

All so beautiful and so unique!! I am in love with the first card...simple embossing, one die cut, a few flowers...and you have put together a stunning card.

Oh WOW Susan what a fabulous post full of gorgeous creations.
Have a similar problem with the memory box dies using the big shot.
luv
Debby

Wow! Susan, these are super! I think the heart die is stunning! But my favourite is the white card - so beautiful!

You've been busy! Fab creations all of them!

I look forward to seeing all your LIM cards Susan and its great that your cards are giving other people pleasure too :0)
Three fab cards, I especially love the first card, white on white is so pretty with that splash of pink too. Cute banners too, great CAS design :0
Jenny x

I am at my workdesk ATM, but am now DYING to get home and use my SU pear stamp!

Lovely thing to do, to give away your cards to people who will really appreciate them.

Definitely hanging on in there - I love your posts Susan! Your cards this week are fabulous as always and I particularly like the very CAS banner card.

Susan, you hit this challenge right out of the ballpark! ALL of your cards are simply gorgeous...really love the 2nd one...that heart and the sentiment just blow me away!

These are stunning and I saw the Memory Box heart in my local craft shop today, think I will succumb to this one. I put a shim of card in and also rub over the die with a tumble drier sheet and find the die cuts come out fine. Hope this helps :)
Anne

Susan, all of your cards shown here at just gorgeous!! And what a good thing you've done donating your cards to those who would love to be able to use them! Hooray!

My goodness--this post is just so full of eye candy, I don't know where to start. I love all your cards, and your scrapbook page. I think my fave of them all (why do I feel like I need to choose?) is that Heart card. It's just an absolute stunner. And, how nice of you to donate your extra cards to the nursing home, and what a treat for them.

Susan you are an unbelievable talent !! Each and every card and layout of yours is always of the highest quality, elegant and always beautifully crafted Always a pleasure to visit your blog.

You really are something else. I'll bet you were an A+ student. We can always count on you for more than one inspiration with every post and they are always inspirational! It's awe-inspiring.

Beautiful cards. Hard to pick a favourite but really like the heart card and the story behind it. x

Busy bee or what! Loving all your super projects. Zx

Lovely cards, well done.
You can view my card here.

Hola Susan, thank you for to visit my blog every week, i'm glad to see you:D
OOOOh Susan, wonderful cards, the first one is absolutely stunning, beautiful embossing and the flowers...i love it!!!!, great job as every week.
A hug from Palma

love the textured white one and the heart one is fab too!

Oh wow! these are all wonderful.. i'm hard pressed to choose a favourite.
suzi b xx

Gorgeous cards Susan, love the splash of pink with the flowers on the embossed one, so pretty. What a fab LO too, super design, papers and colours, looks amazing. Thank y9u for dropping by me earlier. Carolxx

Wonderful cards, love them all and your super L.O. Just been having a peep at your drawings! Love your "what lies beneath" it's fab!
Diane

What a fabulous collection of cards! That Memory Box heart die, is gorgeous and totally pops on the red background!