The Magic of Christmas

Today, I finally sat down to scrapbook again.  I don't think I've completed a layout since the week before Thanksgiving!  And let me tell you, I took all day long with this layout. It was like I'd forgotten what to do.  In the weeks prior to Thanksgiving and before Christmas, I spent most of my time making my Christmas cards.  I send out about 50 cards each year and for some reason, I want them all to be different.  I just can't seem to create one card over and over.  Then, of course, I have the MOST difficult time deciding who gets which card! LOL!
Geesh! I'm rambling!  Anyway...here's the layout I've been working on all day today. 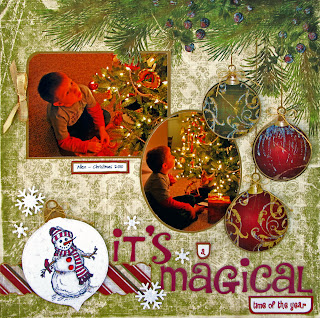 I used the Bo Bunny Christmas papers for this layout. I had purchased two sheets of the background paper, just so I could cut out the ornaments and pop them up...and that's exactly what I did. I also added a little glitter to the ornaments with Stickles. I rounded the corner of the rectangle photo and then cut the other photo in an oval shape with my coluzzle. The snowman ornament was stamped with a Flourishes stamp and colored with Copics. I added some bling buttons and a bit of sparkle to the snowman with Stickles too. The snowflakes were punched with MS and EK Success punches. Title chipboard letters are Thickers and the other title letters were done on the computer. I cut a bit of the greenery with an Xacto knife so that I could slide the photo under it. Journaling is under the photo with the ribbon pull and reads:
Allen, I had to beg you to sit still for a minute so that I could get a few photos of you and the Christmas tree. I finally found the magic phrase to get you to work with me… “Remember Allen, Santa Claus is watching you.” That phrase worked like a charm! You sat so still and you were so patient while I snapped away with the camera. Now THAT’S magic!   (December 20, 2010)
Thanks for stopping by! Until next time....

What wonderful pictures! He doesn't look like he is posing! Glad you had a good Christmas. I'm having trouble getting back in the swing of stamping again!

So cute! Enchanting pics, love how you matched the colors, really magical! =)

Beautiful layout..love the pics with the light reflecting off his cute face. I'm like you in so much as I don't like making more than two of anything....but I'm not as disciplined as you and didn't do Christmas cards this year. Happy New Year (almost).