It's Saturday and time once again for this week's challenge at Less is More.  The challenge this week is Neutrals.  According to our challenge hosts...this could be anything from off white to black with any shade of beige, brown or grey in between. At first, I was drawing a total blank...but once I got started, the ideas kept flowing!  The funny thing is, I just finished my cards for the OLW challenge yesterday...and had a terrible time trying to create using just cream, black, and a touch of bling!  Go figure!
I've made four cards today.  I don't know why I do this, I guess I think if I make just one more card it'll be something that really wows me! LOL! 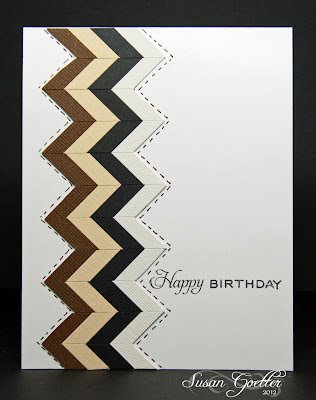 This is the first card I made.  I made a chevron strip using direction from Jennifer McGuire's post here.  I cut it out and adhered it to my card, then added a little faux stitching on either side.  Sentiment is from Flourishes. 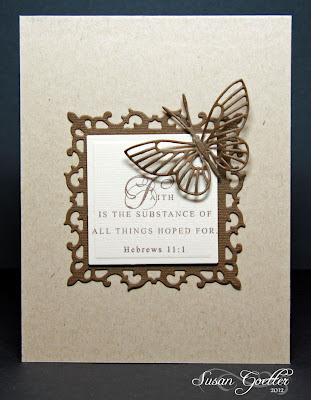 This card was made with a Kraft card base.  I used a Spellbinder die for the brown square.  I cut a beige square with another Spellbinder die, and stamped the Papertrey sentiment on the beige piece.  The butterfly is from Memory Box and is the smaller butterfly.  Kind of a pain to cut out, but I finally got a metal shim and it works a bit better. I just got the lacy die that I used for the brown piece....and I LOVE it!  I'll be using it quite a bit I'm sure! 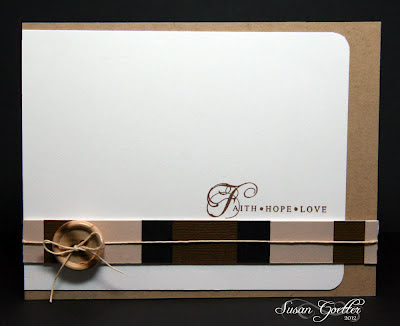 This next card just kind of fell together.  I used a Kraft card base.   I had scraps left over from making the chevron, and I just adhered them to a piece of card stock and cut it about 5/8 inch wide.  I punched a hole in the strip on the left hand side and wrapped the string around the strip and up through the hole...then just ran it through the button and tied a bow.  Sentiment is from Papertrey Ink and is stamped in brown.  I initially had the striped piece on a white card base, but managed to stamp the sentiment crooked, so instead of throwing  it away, I peeled the strip off, cut the white card front down so that the sentiment was straight.  Then I realized that the strip was too long to fit just the white, and I didn't want to have to re-do the twine, so I just plopped it all down on the Kraft card base...and I really like the way it turned out...much better than just a white card base!  Mistakes can sometimes work out pretty good! 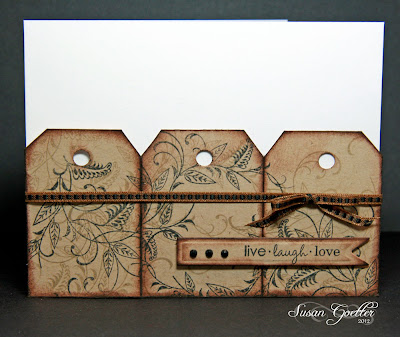 This last card was inspired by a card I saw on Pinterest.  I made three tags from Kraft paper, inked the edges with some dark brown, then adhered them to a strip of card stock.  I stamped the images in both brown and black on to the tags.  The image is from Papertrey Ink.  I used a sentiment from Papertrey also...stamped on Kraft paper, cut out with a Spellbinder die, then pop dotted over the tags.  I added three black bling pieces on the tag.  The ribbon couldn't have been more perfect...how cool is that!
Thought I'd also add in a recent layout of our granddaughters, Camilah and Georgia. You can see that I also used the chevron tutorial for the larger chevron on this layout. 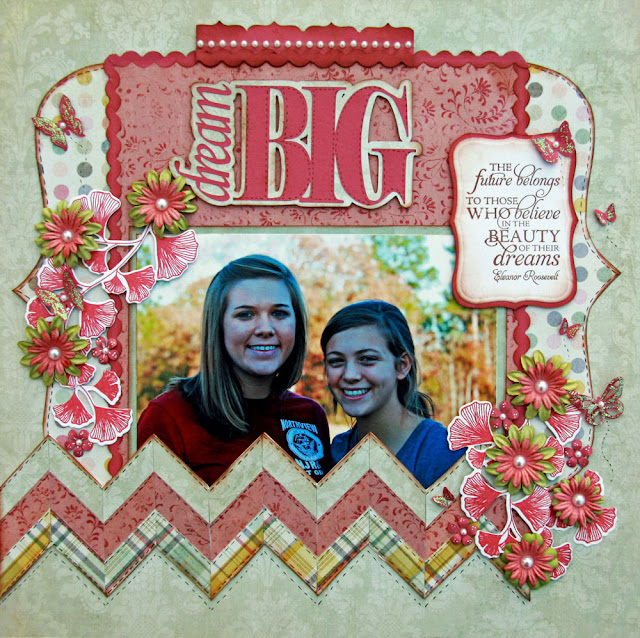 Photos of two of our granddaughters, Camilah and Georgia. I used My Mind's Eye Miss Caroline Fiddlesticks collection for this layout. The title work was cut with the Cameo. The quote is a stamp from Flourishes. Butterflies are all MS punches. The pink leaves are a stamp and die cut from Papertrey Ink called Harvest Berries. Flowers are all from my stash, and I layered them and added a pearl for the center of each. The polka dot background shape was hand cut using a shaped background piece for the pattern. The "rick rack" border around the pink background was made with a scalloped punch (again...found the directions for the how-to on Pinterest). I added quite a bit of faux stitching and inking. Journaling is tucked behind the pink mat at the top with the string of pearls on the pull tab and reads:


You two have grown up so fast. Camilah, in just a few months you will be making decisions about what you want to do with your life…and Georgia, you won’t be far behind her. You both have so much potential and I know that each of you can achieve anything you set your mind to. As you move ahead and make those decisions about your life, I hope you’ll always remember Proverbs 3:6 which says: “Seek his will in all you do, and he will show you which path to take.” (New Living Translation)
Bet you thought I'd never finish! LOL! Thanks so much for stopping by! Your comments are truly appreciated!  Until next time...
Hugs!

LOVE the cards- I think the middle two are my faves. Black and brown and tan always look so classy together.

Beautiful cards Susan and a fab layout! I must say the chevron card really has the wow factor!

Oh they are all gorgeous, but I love the first two the best. I need to find out how to do those chevrons....
Happy LIMing!
Rosey x

Wow - you are on a roll! I love that I am not the only one who struggles on some days but on others it flies fantastically. Love the chevron strips!

you always make the most wonderful cards, susan... these are fantastic! and the layout... wow!! so beautiful (and so are your granddaughters!)!

Beautiful cards and a great layout girlie!!!! Thanks for sharing the link on how to the chevron border. It is definitely all the rage!

Oh wow! Another stunning bunch of inspiration! The chevron you used on your layout and your card is great, I think the colour strip is my favourite here
Anne
x

WOW, WOW and WOW again!
These are all absolute crackers... Fabulous, fabulous cards Susan.
What wonderful work!
Thank you so much
Chrissie
"Less is More"

What a fabulous set of cards, must look up the chevrons they look great with the stitching. That butterfly is stunning.

Oh Wow! these are so beautiful Susan. The chevrons are so striking on both the card and the layout. Gorgeous!
Sarah x

Absolutely stunning cards Susan, it's a good job I don't have to pick a favourite because I love them all.
Great lo too
Beryl x

Gosh Susan, you create such fabulosu cards eveyr week.
Love th ebutterlfy, I too have that die, have used it lots! Love them all
Thanks as always
mandi
"Less is More"
Your scapbook pages are works of art, such trasured memories

Fabulous cards Susan, I really couldn't pick a favourite - I love them all!
Margaret x

All your cards are beautiful. I love the one with the butterfly.
Yvonne

Hola Susan, thank you for your kind comment:D.
Fantastic design the zig-zag thecnique, i see the video.
I think these cards are perfect for a man.
Beautiful girls!
Have a nice week too, a hug from Palma

Absolutely wonderful are your creations susan:)

What a busy lady. Love the chevrons and thanks for the tutorial link. Zx

Every single one of those cards WOW-ed me. Fabulous work Susan.
Hugs,
Sharon xx

These are so classy Susan I absolutely love them! Your LO is gorgeous as are your grand daughters:)
Val x

Fabulous cards and scrapbook page. Love your chevrons. Will have to have a look at the tutorial. x

Another knockout week for you Susan. I can't decide if I like the tags or the chevron card more - perhaps the chevron just takes it on impact (say that technique too but I went wrong when I tried it!) The layout is stunning - love how you've created the ric rac and the layered flowers over the pti stamps are gorgeous!
Tara x

Hola Susan, thank you for your comment about my wedding card:D
Have a nice week!

Goodness GRACIOUS...how FABULOUS are all of these?!! Your talent never ceases to AMAZE!

Susan, what a great set of cards, and a gorgeous scrap layout! I really love that first zigzag card. Oh, and the Faith, Hope, Love card is perfect! :-) Harvest Berries mixed with flowers in the layout looks awesome!

Another fabulous set of cards!gorgeous layout too!

LOVE that top card - the paper pieced chevron is fabulous!!

Well I said wow as I scrolled down each card (and LO!) but my biggest WOW was for the chevron card...thats amazing!
Diane

They are all great cards. However the chevron strip looks stunning :)

Beautiful Susan. I love the vertical chevron and the colour blocks cards the best.

Wow Susan, you have been busy with those neutrals. I love them all.
JO x

Fabulous cards Susan and each one so different. Think my favourite is the third one, although I really love those vintage tags. Beautiful layout too, the chevrons look like patchwork. xx

I love the chevron card! It is so striking with the neutrals as is the card you made from the leftovers! The butterfly is so pretty and I love the way you stamped on the tags and lined them up. And, what a perfect page of your granddaughters!

Good heavens, Susan! Four WONDERFUL cards! The chevrons are amazing! And your layout is fantastic!

What a wonderful cards Susan! Verry nice!
By the way: I love your scrapbookpage too!
Deezy

OMWord Susan - what fabulous CAS cards - love the chevron design - it really is stunning, and the Butterfly and frame is gorgeous too. I have a feeling you will be "Showcased" again!
Hugs, Sylvia x

I love this trend for chevrons at the moment and your first card is just amazing..... Thanks for the link to Jennifer McGuires video too :0)
Love that you make four different cards for the challenge and all are so fantastic.
Jenny x

Great cards Susan, especially like the chevron card and the faux stitching is a lovely finishing touch. Thanks also for the link to Jennifers video.