The cue word at CASology this week is SHOE. 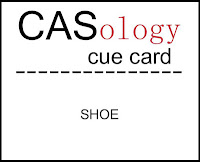 Boy, that's a tough one for me!  I searched and searched through my stamps trying to find something that would work for this challenge. Unfortunately, the only stamps I have are stamps that I've used often, and they just didn't inspire me like I thought they would....but I gave it my best shot anyway! LOL! 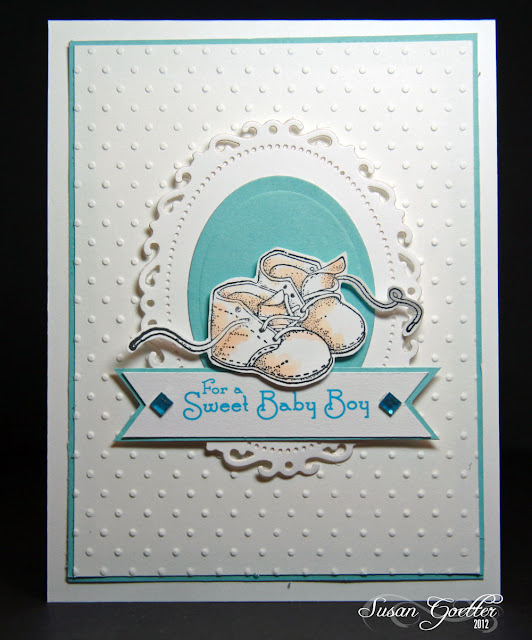 I've used these baby booties on numerous cards, so I turned once again to this image.  I embossed a white panel with the dotted folder, cut a Spellbinder floral oval, then a smaller oval in blue.  The shoes were stamped and cut out and lightly colored with Copics.  Sentiment was made on the computer, then printed and cut out.  I added two small pieces of bling to the tag.  I also added a teeny little blue border behind the white dotted panel.  The oval and booties are pop dotted for dimension. 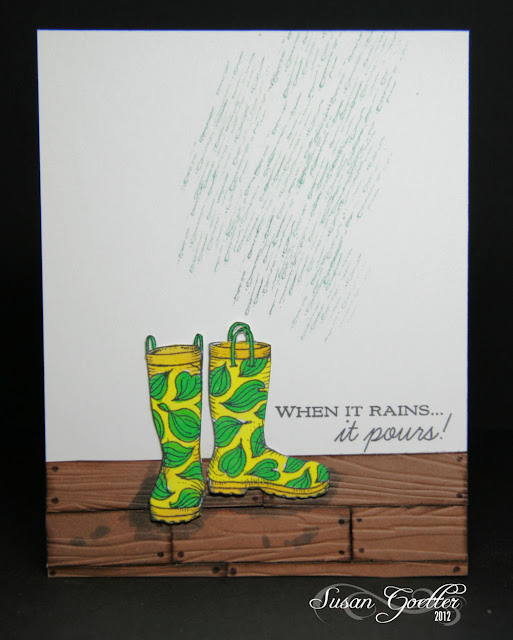 Then I found this rain boot stamp (Flourishes).  Stamped the boots, colored them and cut them out.  I made the floor by embossing a piece of brown card stock, then cutting it into strips and inking the edges. Then I just paper pieced the "boards" and added a few brown dots to look like nails.  I popped the boots on top of the floor and added a little grey coloring around the boots and on the floor to resemble water puddles.  Then I really messed up and decided to add some "rain" with another stamp in the collection.  I stamped it numerous times as one stamp was so small of a "rain shower", but now I'm not so sure I like it.  Sentiment is also from Flourishes. 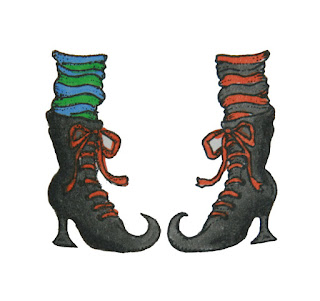 I also found this witches boot from another Flourishes set.  There was only the boot on the right, so I had to stamp it off on a piece of acrylic and the mirror image it.  After I got it stamped twice, I managed to get ink smudged on the edge of the card.  The reason I didn't make a card with these boots is that I couldn't think of a single sentiment that I could use.  I don't really get into Halloween...not my favorite holiday.  The extent of my "Halloween" is usually pumpkins on the front porch and handing out candy to the grand kids and some of the neighborhood kids.  I thought about making a wedding card with these boots with a sentiment like...."love you so much (outside)....it makes my toes curl" (inside of card).  Finally, I just decided to quit on this idea! LOL! 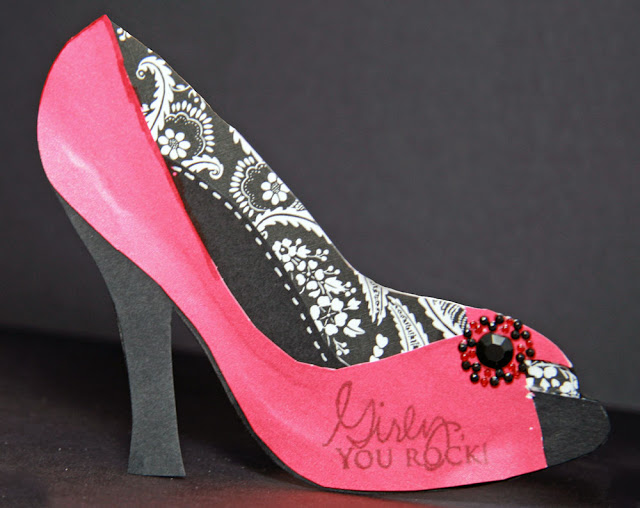 Not being totally satisfied I went in search of something different.  I found this old .pdf file on my computer with a shoe on it.  I piddled around with it until I managed to get it into my Silhouette program.  Then I made a mirror image of the shoe and welded the back of the heel together to make a folding card.  Then I simply cut out the pieces for the shoe and paper pieced them over the top of the card base...yes, it took a while, but once I got the image all set up in the Silhouette program, the rest was a snap!  The sentiment is from PTI and the bling added to the top of the shoe is from Prima.  I also added a bit of white doodling.

I'm not sure which is my favorite...what about you?

Thanks a million for stopping by!  I truly appreciate all your wonderful comments! Until next time...

I think they are all great xx Jan

I like them all, but the rain boots is my favorite! I LOVE how you did the "floor" and those raindrops look fabulous! NJ!

Wow - you're on a roll!!! Love the baby booties, but it's the wellies that have it for me.

I love all three, but the creativity in that last one is just above and beyond (although that floor is also amazing!)Love the shading on the pump - it looks 3D to me! Thanks so much for playing along with CASology this week!

Wow, Susan, I had trouble doing just one for this challenge and you come up with 3 winners and a possibility. The baby shoes are adorable and I love the bright colored boots and I think the rain is perfect! The last one is amazing. And I like the witch shoes. Maybe with just the word wicked! Someday you'll have just the right occasion to use them.

Susan I loved all your attempts but your final decision is so creative! Isn't the Silhouette the best? Thank you so much for joining us this week at CASology!

All your cards are fabulous - I love them all! Hugs x x

A tough choice to choose a favorite, but if I had to it would the rain boots! Love the floor boards you created!

susan, susan, susan... i knew i could count on you to have more than one fabulous card! love that shoe card... totally fabulous!! thanks so much for playing along with CASology!

Good heavens, I actually thought the last card was a real SHOE! Amazing, Susan! All three cards are fabulous!