In honor of the crowning of Queen Elizabeth in 1953, our hosts, Chrissie and Mandi, have chosen red, white, and blue as our colors for this week's color challenge.  On a bright note, since Chrissie remembers the Queen's coronation...that must mean that Chrissie is older than me! LOL!!!  You see...it doesn't take much to make me happy!  I hate to admit it, but...I have serious difficulty using red, white and blue together!  Maybe it's just the brightness of the colors...who knows! Okay, back to my usual...I've made about 5 cards today...none of which make me dance, but they are finished and my brain has shut down for a while.  I think I'll go read a good book when I finish this post! 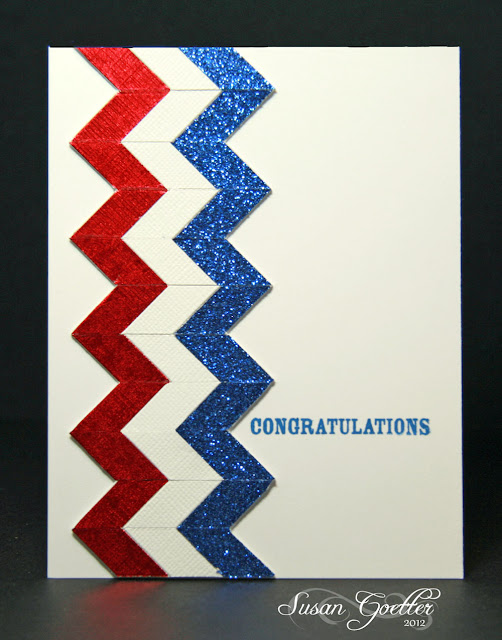 I believe this first card is self explanatory...just made some chevron strips with some sparkly red and blue paper....added it to my card base, then stamped Congratulations (HA). 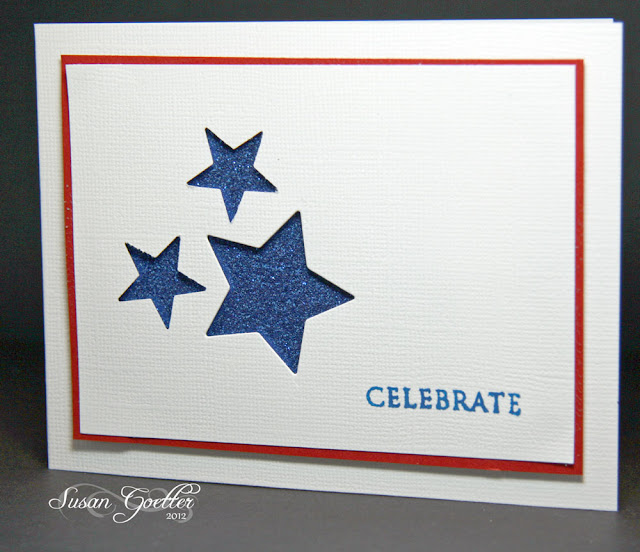 For this card, I punched the two smaller stars, then used a star die cut for the larger star from a piece of white textured card stock.  I put a red border on the white piece.  The blue sparkly paper is the same as I used in the first card (and something that has been in my scraps pile for a while!)  I cut a small square of the blue and adhered it to the card base.  Then I pop-dotted the star layer over the top of that...super easy!  Sentiment is from PTI (I think). 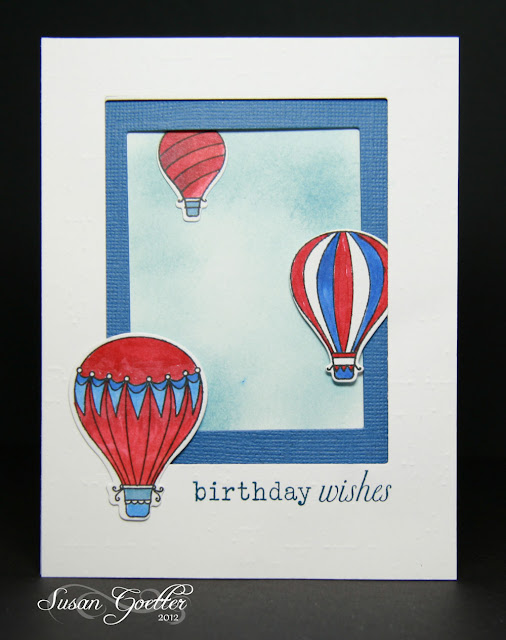 I've made a card similar to this one a while back, but it seems to work well for the red, white, and blue theme.  The hot air balloons are from PTI.  Just cut a white layer and a blue layer and sponged in a little light blue for the sky.  Colored the balloons with Copics, then popped them on the card...Fun card! 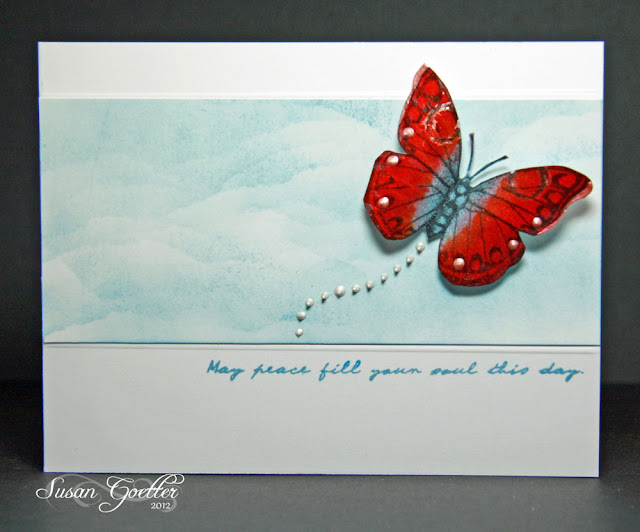 Can't say that I really like this card or the next one, but I thought I'd post them for you anyway.  I love the sentiment on the card above...but something is wrong with that PTI sentiment...the "L's" in fill, are not complete and always leave a space where the letters should be closed in...I think I got a bad stamp. Does anyone else have that stamp and does your stamp do this? For the butterfly, I just sponged some DI - red and blue on white card stock, then stamped the HA butterfly in black.  I added a touch of liquid pearls, and a bit of glimmer mist.  Sponged the sky with some DI blues, and then added a scored line above and below the sky. 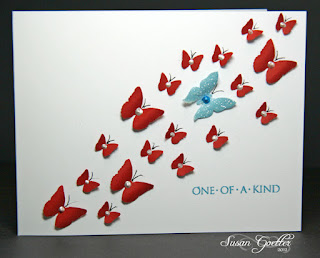 This card was just something random that I came up with.  I had all these butterflies in red punched in my "one day" box (can't remember why I punched them out), so I punched a blue butterfly and just let them all flutter across the card....I drew the little antennas with a marker.

Our beautiful granddaughter got married in April, and I'm scrapping some of the photos I took at the wedding and thought I'd share this one with you.  Pensacola Beach is a beautiful beach with sugar white sand.  We only live about 30 minutes from the beach, but we rarely go out there because of the crowds.  I'm really glad we made it to the wedding...I wouldn't have missed it for the world! 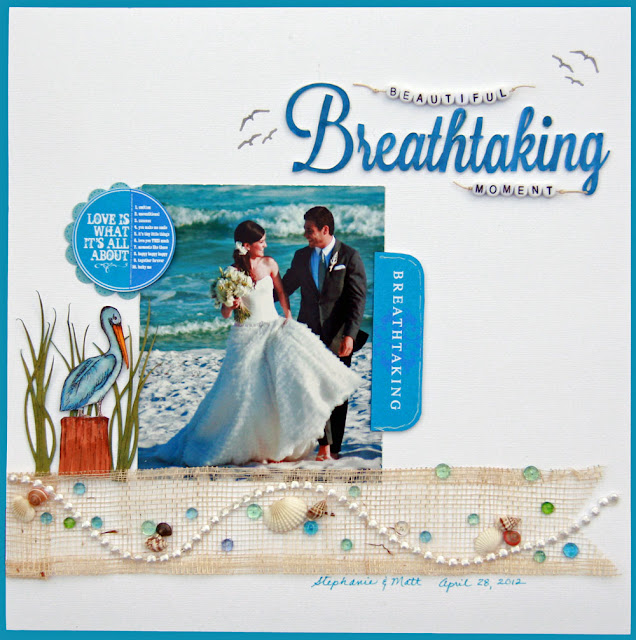 Our granddaughter, Stephanie and new husband, Matt. I used white card stock for the background. A very simple layout so that the focus is totally on the photo. The bird was stamped with a Gina K stamp and colored with Copics. The grass, the two tags, and title work "Breathtaking" were all cut with the Cameo. The birds flying are stamped in soft grey and are a Gina K stamp. I found the netting in some of my "old" stash and cut a strip to ground the photo, then added a string of flat pearls, some robin egg bling, and a few tiny shells. The beads I used in the title are some alphabet beads that I've had in my stash forever...and I strung them on just string and knotted the ends. For the "Breathtaking" part of the title, I cut it out 4 times with the Cameo and layered the letters to give it a chipboard look. Their names and the date of the wedding are hand written with a Memento blue pen. Journaling is tucked behind the photo with the breathtaking tag (designed and cut with the Cameo Silhouette program). Journaling reads:

Watching the two of you joined your lives together was a special moment for me and your Papa. I'm so glad that we were able to be there for your wedding. I took this photo just minutes after the wedding ceremony was over and the happiness and joy that lights your faces definitely makes this a beautiful breathtaking moment! I love that you chose to go barefooted for your wedding on the beach…how perfect!


(The blue border is not on the layout, it was added in Photoshop so that the white edges would be visible)

Thanks so much for stopping by!! I truly appreciate the time you take to stop by and leave all your wonderful comments! Until next time...

Hi Susan, you always do us proud with your submissions to our challenges and this week is no exception. Wonderful cards. I find this colour combo difficult too, but I think it had to be chosen this week.
If you care to work it out... I was 7 when the Queen was crowned, but 8 not longer afterwards!
I'm really old!
Thanks so much
Chrissie
"Less is More"

Wow! You've been a busy girl! Love the sparkle of the first one - it could go in the CASual Friday challenge - to use bling!

wow...... these are beautiful cards, love them all

Susan you have so much talent l'm pleased to be able to place my comments on your bog and its great too that your sharing all your wonderful cards and other creations and these are absolutely fantastic truly stunning:)x

Wow you may not like red white and blue together but you've made super cards. I particularly liked the hot air balloons. Stunning scrapbook page. Would look fab in a shadow box as a memory keeper. x

They're all fab as usual Susan but I like the chevrons the most (I like the bright glitter) closely followed by the stars. Your layout is stunning - how wonderful to be married barefoot on a beach :-D

another fun set of cards for the challenge, susan! your layouts are always so amazing, but this one is absolutely stunning!!

Your designs are so eye catching. I can't pick a favour from amongst them. They are all brill.

Fantastic set of cards, great bling on the chevrons and stars, love the way the air balloons come towards you, large butterfly is FAB, your flight of butterflies is awesome and the sentiment so apt, while your scrapbook page is Wonderful. You have had a really busy time.

Hi Susan, what a wonderful selection of cards and layouts, just super!

What awesome cards! Love the last one with all the butterflies:)

I'm with you on the RW&B colour scheme Susan but you've done a fab job as always, I do love those chevrons! Your layout is simply gorgeous, as is your grandaughter. xx

Hi, Susan, wow, what great creations you made only with the idea of three colours - amazing.
Thanks for your visit and your lovely comment on my blog.
Hugs Claudia

Seems like the LIM challenge with red, white and blue has been an easy challenge for you :) Great cards! I can't pick a favorite, but I can try and pick two. I love stars, and I think yours is just perfect - not too few, not too many. And I also think your card with chevrons is a perfect example of a CAS card!

Lovely cards Susan. My fav is the butterflies and the great sentiment. Wonderful scrap layout too.
Linbyx

There's my girl, making my jaw drop again! My fav is the stars card, which I've pinned. But, oh Susan, what a heartfelt gift you've made for your granddaughter with that layout. Breathtaking is the perfect word for the layout as well. I felt like I was right there with them. Stunning. You could sell frames with that photo!

I'm always amazed at how diverse your selection of cards always is Susan, they are fab! Love the chevrons and the butterflies:) Your layout is stunning as is your granddaughter, must be in the genes eh? :)
Val x

Hi Susan, your cards are wonderful, I love them all, I'm not surprised you need to relax with a book. The layout is lovely, what a fantastic place for a wedding!
Jo x

You have been busy haven't you? Brilliant cards - especially like the star one.

I've really got to try those chevrons, Susan! And the punched stars are awesome as well as all the other cards. What an awesome page you've made! I can see why this photo was a favorite and you've showcased it beautifully!

Well Susan, for someone who doesn't like using red, white and blue together you've certainly come up trumps! Fantastic cards - clever idea with the chevrons but love the flight of butterflies. Like you I was delighted to find out that I'm younger than Chrissie as well!!! lol. Hope you got my email?

Great cards! I love the two cards with the butterflies on!
Karin

Fabulous cards Susan and your LO is just beautiful.......Such a great picture!

No wonder your brain shut down! Look at all the amazing work you've done! Where do I begin...? Your chevron card is super! And your scrapbook lay-out is GORGEOUS! Most of us only get ONE project made for any given challenge, however you (the multi project queen) usually have two or three! Of course you have brain shut down....

You have mojo in bucket loads Susan
all fabulous, but, the fist too really do it for me!
i struggled with rWB too...a difficult one, but, as Chrissie says it HAD to be done!
I wasn't here for the coronation...too early even to have been a twinkle lol
SO young...ha ha ha I wish!
Thank you very much
mandi
"Less is More"

Wow! You are amazing Susan. Such a fabulous selection of cards. I love those bold chevrons and the butterflies too. Your Scrap LO is truly beautiful too x

Hola Susan, thank you for your comment :D
Oh Susan what great work, i don't know what is my favourite, but your scrap page is fantastic, great day for your family, cangratulations and blessings for this beautiful couple.
A hug from the very, very hot island

I missed these last week but you can probably hear me oohing and ahhhing all the way across the pond Susan! Each card is more stunning than the last and then I came to the layout - I think the title says it all... absolutely breathtaking!

So many ideas and beautifully executed, I love your beautiful layout of the wedding, she is a beautiful bride