It's the third Saturday of the month, and the Less is More challenge on week three each month is a theme challenge.  This week, Chrissie and Mandi want to see something "shiny" on our cards. 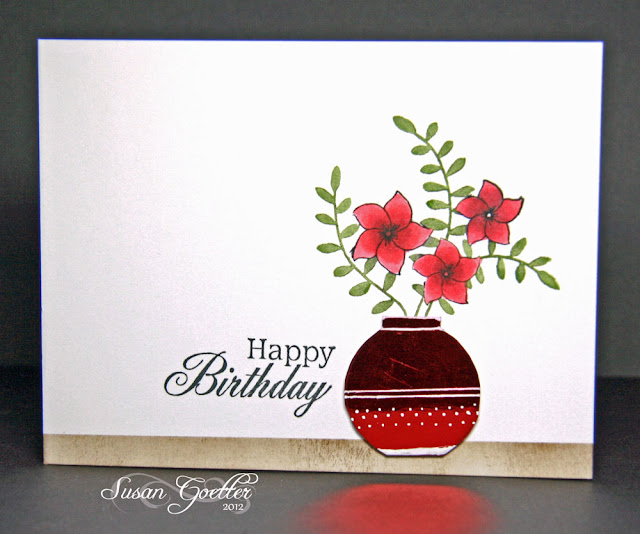 On this first card, I used GinaK stamps.  I stamped the vase image on a piece of shiny red card stock. I think this paper must have been in my stash for several years now....so it's good to be using some of the stash.  I stamped the flowers (after inking stamp with Memento markers), then colored in the red blooms.  I added a touch of white doodles on the vase.  I'm amazed they dried and didn't smear!  The sentiment is also from the GinaK collection.  I sponged in a base for the vase to sit on and popped the vase on pop dots. I'm guessing everyone is having as much trouble as I am trying to get a good photo of something "shiny"!!  Trust me...it's a VERY shiny red...see the reflection on the black card stock? 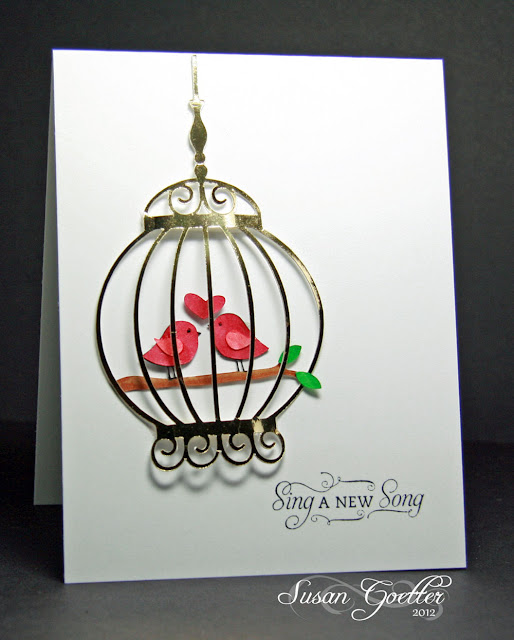 I think my second card might just be my favorite.  I cut the bird cage (with the Cameo) from very shiny gold card stock.  The birds, heart, limb, and leaves were also cut with the Silhouette (Cameo).  I curved the cage and popped up just the centers on each end to give it a rounded look.  The birds, leaves, heart, and limb were colored with Copics and adhered straight to the card.  I did lift the bottom of the limb to the outside of the card. Sentiment is from a Flourishes set. 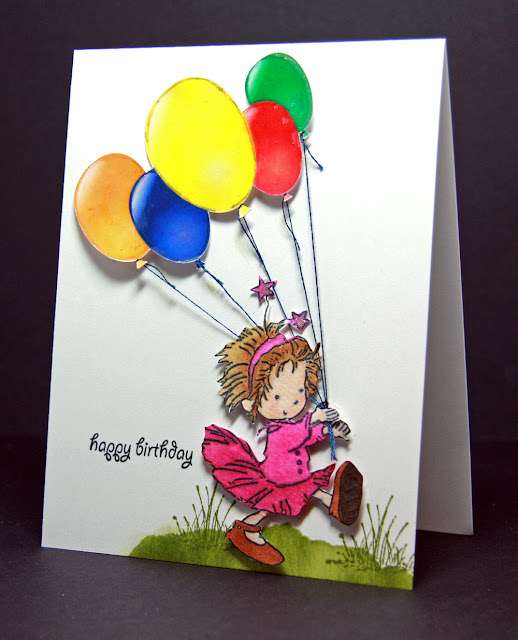 This is a new stamp from Lily of the Valley that was part of my prize for winning last month's challenge from St. Luke's Charity Challenge. I was so excited to win! Isn't this a fab stamp!  I actually won two different stamps.  This image actually was the little girl carrying a birthday cake.  I stamped the image and cut away the cake and arranged the strings from the balloons through her hands.  I sponged a little ground under her feet, and added a couple of tuffs of grass with a GinaK stamp. I colored the image with Copics.  The balloons were cut with the Silhouette (Cameo).  In order to have "shiny" on this card, I coated each of the balloons with some glossy accents.  It's very difficult to get it to show up right though! 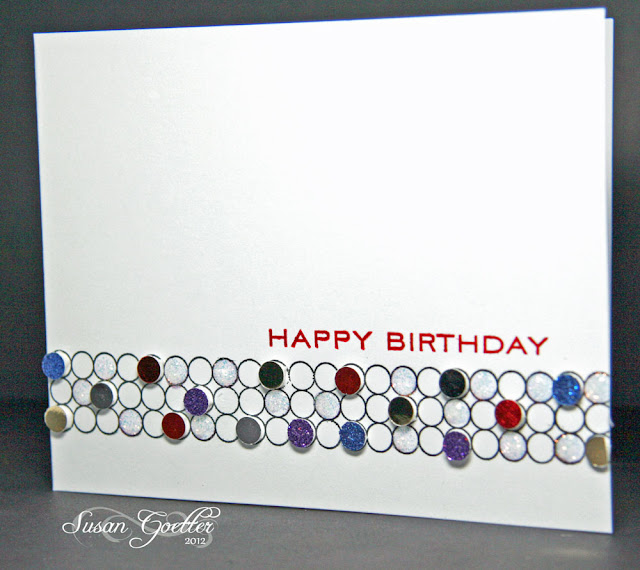 This last card was just something I was playing around with. Not too sure I really like the finished product...but I thought I'd show it to you anyway.  I stamped the circles using a PTI image.  Then I punched small circles with a hole puncher from all the different shiny papers I had laying on my desk.  In retrospect, I probably shouldn't have popped them up on the card, and just adhered them to the circles.  The shiny white spots are made with stickles.  Birthday sentiment is a PTI stamp that I stamped in red then heat embossed it with clear.  I tried to heat emboss with red, but made a MAJOR mess of several cards, so I finally gave up and stamped in red and embossed in clear!
Sharing a layout I did recently of my Daddy and two of my sister's children. 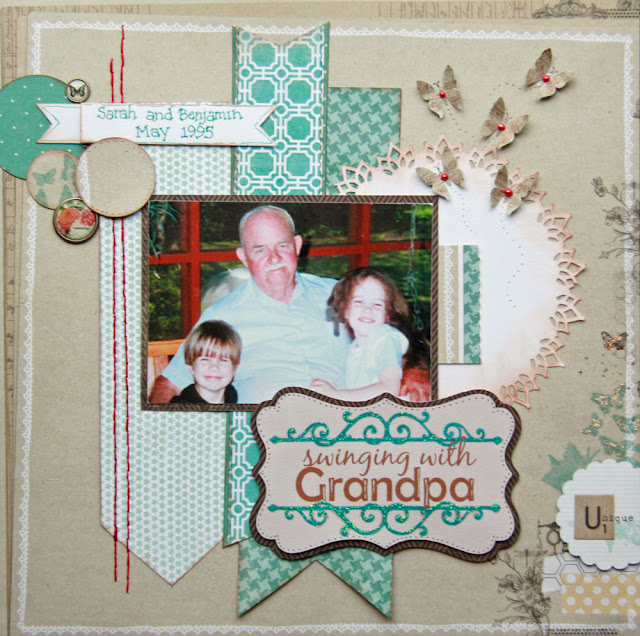 I used My Mind's Eye papers Follow your Heart for this layout. The border on the Kraft colored paper is purposely crooked, and it totally messed with my mind trying to get my layout on straight! LOL! I cut three large banners to layer behind my photo. The round lacy circle behind the photo was made by cutting about a 6 inch circle and then using one of my corner punches to punch around the edges. Circles on the top left corner were punched with circle punches. I also added two brads from the Follow Your Heart collection. Butterflies were punched with a MS punch, and I added a little glitter and glossy accents to each of them...as well as a red dot of liquid pearls for the body. The title tag and the brown piece backing it was made on the Cameo. I added a couple of lines of red stitching down the side of one of the banner strips. The "unique" scalloped piece on the bottom right was cut from a matching piece of paper and layered over one just like it with pop dots to give it a little dimension. Journaling is tucked behind the photo and reads:
From my earliest memories, swinging with my Daddy (your Grandpa Perdue) was something we all looked forward to at the end of the day. He would always sing to us and keep that swing moving. The tradition carried on to all of our children, and any time we went to visit, there would always be a grandchild or two swinging with Grandpa. Sarah and Benjamin were so lucky to live next door to Grandpa and Grandma….that meant they got LOTS of extra swing time! Just look at the smiles on their faces. We were all so fortunate to have such a loving and fun-loving Daddy and Grandpa!

That's all for me tonight.  Thanks so much for stopping by.  Your comments always make me happy...and I sincerely appreciate you taking the time to leave a comment!  Until next time...

You have been busy! Lovely cards and scrap layout, You're right photographing was very difficult this week. I love your birdcage and the reflection of your vase does show off how shiny the vase is.

Oh Susan the cards are all so lovely but I am captivated by the bird cage, just fab!

As I read your words about your father and grandfather, how wonderful to have these beautiful memories. Thanks Susan for sharing.

Wonderful as always Susan. I am especially fond of the bird cage. I have several birdcage dies and never thought to use metallic card stock. I'll have to run with your idea.

Gosh, where to start? You've out-fabbed your fabulous with all of these beauties! My favorite is that amazing birdcage. I purchased a birdcage Nesties die which I haven't used yet and now I can't wait to cuttlebug it out of gold paper! Thank you for the inspiration, as always!

Very sweet story of Grandpa spending loving time on the swing with his children and grandchildren. Melts my heart and your words captured it perfectly!

Your posts are always such a delight Susan and the fact that you produce three or four cards for our challenge each week is a real bonus. These are all stunning, but my faves are the second and last ones.
The bird cage and birds look wonderful and the random shiny circles on the last one are ace.
What wonderful memories must be stirred by your layout this week too!
Thanks so much
Chrissie
"Less is More"

Oh Susan - what a plethora of gorgeousness! You have been super busy. Love all your LIM cards and your scrapbook page is brilliant - love the addition of those butterflies and the journalling. Great goodies from your win at St Luke's eh?

What a treat to see your gallery of shiny cards Susan! I love your bird cage and what a great use of mirri card! The dotty border with the popped up spots is brilliant and the vase of flowers is pretty too. Congratulations on your St Lukes win and what a sweet card you made with your prize! I always love to see your layouts too - and what a very happy photo this one is!

Fabulous cards, Susan! I love the way you've curved the birdcage for added dimension. I like the way you've sponged ground just partway across the balloon card. And I think the circles on the last card look great popped.

Hola Susan, fantastic job, the bird cage is absolutely amazing, great idea!!!even for a wedding card:D and the little girl with all these balloms are so sweet.
Wonderful memories about your dad and grandpa, i life down of my parents...my son is so afortunate he is up and down, home mum, home granny :D:D:D.
A hug from Palma

great cards, the bird cage is just perfect, love it

Fabulous cards Susan and the layout is so beautiful :)x

Lovely projects and your LIM card is awesome

Wonderful selection of ideas Susan but I love the bird cage:) Love the LO of your Dad it's such a great way of preserving memories:)
Val x

I'd love a day in your craft room with you susan, hopefully some of your terrific mojo would rub off!
Your cards are simply fantastic.
Love the bird cage, it is superb. the simplicity of the border one is FAB
Thanks so much
mandi
"Less is More"

Love all of your cards again Susan but the bird cage one is my fave - simply beautiful.

Oh my how productive you are Susan. I love your cards and especially the ones where you have used your Cameo. I'm still a newbie with mine but you've really inspired me to use it more.The balloon card is just wonderful!

Congrats on your win and what a gorgeous bunch of cards. I love the stamped circles, can see what you mean about popping them up but it looks so simple, so elegant.

Oh my gosh! Each so different and so wonderful in their own way!! I love the delicate gold birdcage with the sweet little bird scene. The sparkly dots are so much fun!!

Super cards Susan, loving that elegant birdcage and those glittery dots and what a lovely pic of your dad. xx

i always know i can count on you to wow us with several cards, susan! all of them are wonderful, but i ithik i like the one with the birdcage best. your layout is fabulous, too!

Oh Susan these are just stunning I really enjoy your art work! Lovely pic of your father:)

Great cards -- that birdcage is my favorite!

I think the birdcage is my favourite too: elegant and fun at the same time. But that dotty one has so much potential. I agree that popping the colours wasn't the best idea, but I hope you'll play with this some more, because it's very cool.

Great set of cards Susan as always. The bird cage is fabulous. Definitely a winner for me. x

You've been busy! Enjoyed reading your post - and the birdie cage is awesome! My fave I think!

Wow , a great set of cards, all are super but love the birdcage best.

I thought the little girl looked familiar but different ;-) Great way to customise her and so glad you enjoyed playing with your prize. I really like your dotty card too - fab idea - bet it was tricking piecing all those little circles on!
Tara
x

I never fail to be inspired when I visit your blog :) The bird cage is my favourite too but that's not to say the others aren't gorgeous... because they are! I'll be gobsmacked if that bird cage isn't showcased!

Wow, Susan, you have outdone yourself this week! That 3D birdcage is amazing and the little girl skipping with the balloons makes me grin. Memories of your Dad in his swing are sweet.