This week at Less is More, we've been challenged to CASE (copy and steal everything) either Chrissie's card or Jen's card.  I couldn't decide so, I CASEd both of them!

Here's my take on this week's challenge: 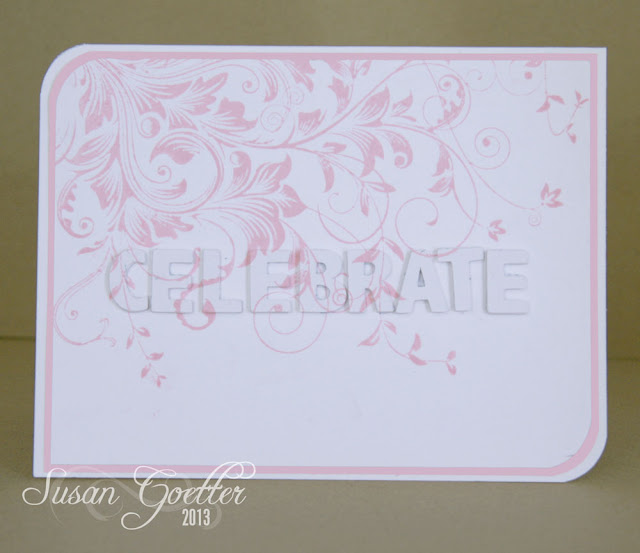 I think this first card is my favorite this week.  This card is a CASE of Chrissie's card.  I was happy to see her card this week, as I've made several of these cards using this technique during the past couple of week, and I think I've got a good system going now.  When I stamp my letters, I cover the stamped image on the card with a piece of acetate, lightly adhere my letters where I want them to be on the card, then stamp them again.  Using the acetate helps me be able to see where I'm stamping.  Super cool technique.  I used my new stamp from HA for the background.  That think is huge...but SO pretty! I cut the letters for celebrate out with the Cameo four times, then stamped the top layer and adhered all the other layers behind that before adhering to the card.  I find it easier to cut out multiple letters than to try to get pop dots cut small enough. 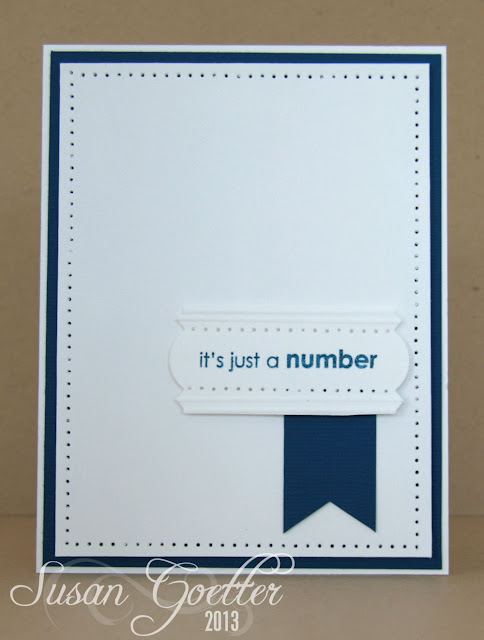 This card is a CASE of Jen's card.  I CASEd the design and the paper piercing.  I have a sister-in-law who will soon turn 65...and I thought this would be perfect for her birthday.  I used a dark blue card stock under the white panel with the pierced edges.  I made a tag using a punch to cut each end, then scored a couple of lines across the long edges and added some piercing to the tag.  The sentiment was stamped in navy and embossed with clear EP.  I cut a banner from the blue card stock to layer under the tag. 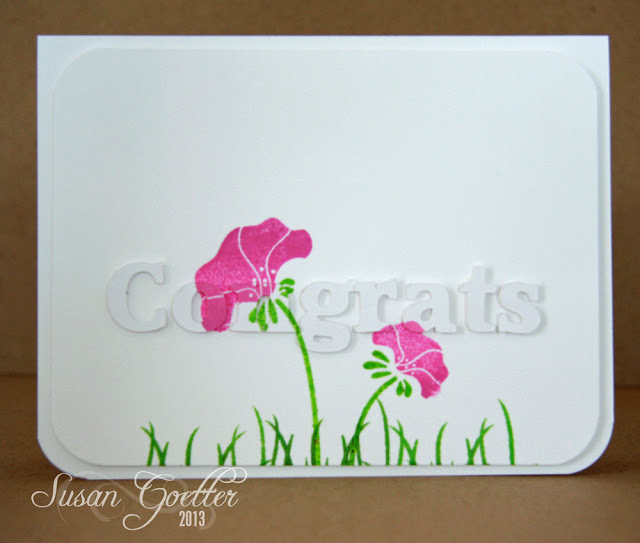 For this card I used a stamp that was in two parts...you stamped the stems then added the blooms.  I cut the letters with the Cameo and adhered them to the card with pop dots. The pink is SO not that bright IRL...must be camera trickery!  Popped the panel on a white card base and rounded all the corners. 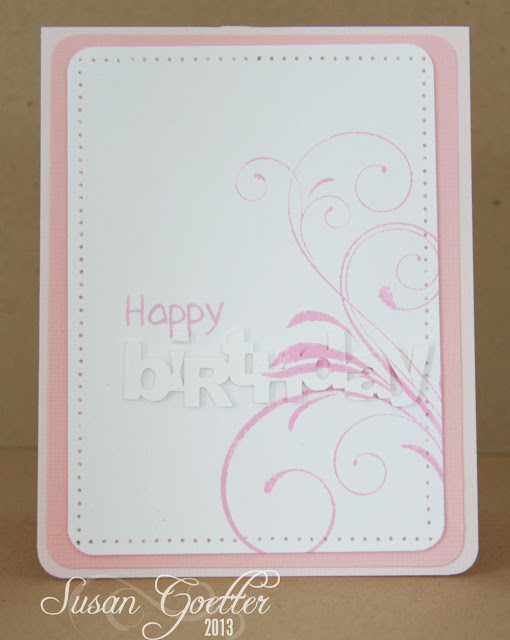 This card is probably my least favorite.  I made it a combination of both Chrissie's card and Jen's card.  Technique from Chrissie and paper piercing from Jen.  I think it's probably the colors that I'm not crazy about.  I seem to be stuck on pink this week.  Maybe it would have been better in another color. The flourish is from PTI, I cut the word "birthday" with my Cameo (I welded the letters together this time...makes it much easier to keep straight!).  Rounded the corners...done!

Which card is your favorite this week?

man you are good, susan!! all your cards are fantastic!! can't pick a favorite.

Wow these are amazing

Fabulous set of cards, like Rosemary I can't pick a favorite

So lovely are your cards Susan x

Very inspirational cards Susan, I like them a lot!

Hi, popped over from LiM to take a peek and your card is very pretty especially that pale shade you have used and such a lovely stamp, I can't wait to have a go at this technique, such beautiful effects.

I'm with you Susan - all the cards are great......but the first one is definitely my favourite. Thanks for the acetate tip - I've been wanting to try out this technique for a while but haven't had time so will certainly give it a go. I wish they'd come up with a name for the technique.....can't find anyone naming it anywhere!!!

Susan! I do wish you'd only do one card each week, you put me to shame.
(said in my sternest telling-off voice) Ha ha, only joking of course, you provide us with some great inspiration. I think your first design is my fave.

Stunning cards Susan and an invaluable tip!!! I will use the acetate on my next card:) My favourite was the bright pink flower one:)
Val x
ps can't remember if I thanked you for the svg file and that gorgeous giraffe digi, anyway many thanks:)

Wow, you really went to town on these cards!! They're all really good, but I particularly like the Congrats card with the grass and flowers. Yours is even more challenging to line everything up since the letters aren't connected. Well done!

Thank you for your kind comments they mean a lot when I saw what you had done this week all jaw dropping gorgeous but I'm with you the first steals the show ! x

My goodness you have been busy! They are all lovely but I think the first has to be my favourite!

susan a set of fabulous cards, i love all of them

Thanks for joining us this week
Jen xx
"Less Is More"

All of your cards are lovely.

Oh my! These are incredible, especially love the celebrate with the HA background (I may just *require* this stamp lol). Thanks for the inspiration.

You always come up with stunners Susan and these are no exception.
Makes me want to go and make some more cards with this technique.
Thanks so much
Chrissie
Less is More

Oh what fabulous cards, first one is my favourite and thanks for the tip, might have time to join in now.
luv
Debby

These are great examples of the techniques shown. Lovely case'd cards. x

Wow, I love your cards. i can't pick a favorite. They are all great to see!

So many beautiful cards again Susan, love them all :) Viv xx