As another Saturday rolls around...it's time once again for the Less is More challenge.  Since this is the fifth Saturday of the month, this week is called "lucky dip"....it could be anything!   Well, this week, we've been challenged to created a card using fruit.  Sometimes we're given a challenge and I'm totally clueless what to do. Not this week!  I have almost as many fruit stamps as I do flower stamps! LOL!  So, today, I made three cards for the challenge. 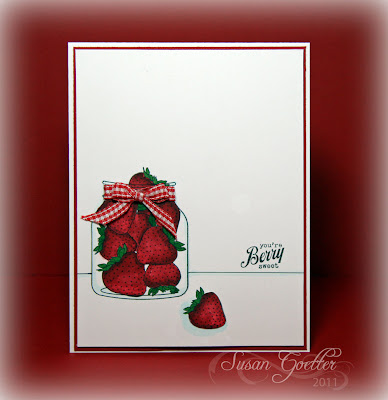 This first card was made using my new stamps from Papertrey Ink's new Friendship Jar collection.  I stamped my jar on white paper and cut out the center of the jar to use as a mask for stamping my strawberries.  I tried just stamping the berries in the jar, but couldn't get all the berries inside the jar, so the reverse masking worked great!.  I colored the strawberries with three different shades of red Copic Markers (R43, R46, and R59).  The leaves were colored with green Copics (YG63 and YG67).  I did a little highlighting with the BG0000 marker on the jar and the line I drew to ground (you knew I'd do this...right?) my image.  Then I stamped one strawberry on the "table".  The sentiment is from the same collection. Then I thought that the jar need a little ribbon to finish it off, so I cut slits on each side of the top of the jar and slid my red gingham ribbon through it.  I tied a tiny little bow and added it on top of that ribbon. (another little trick I use when adding a bow to a straight piece of adhered ribbon is to use matching sewing thread to tie around the ribbon.  Tying the ribbon gathers it up so that it looks like the bow was tied with the ribbon around the top of the jar...does that make sense?)  I was so happy with my card....until I realized that at some point in time I had laid the card on top of the black ink pad and had ink all over the back of the card!  Well, I couldn't possible let all that coloring go to waste, so I cut off the card front, layered it on a deep red card stock and popped it on top of a white card base.   I managed to salvage this one! 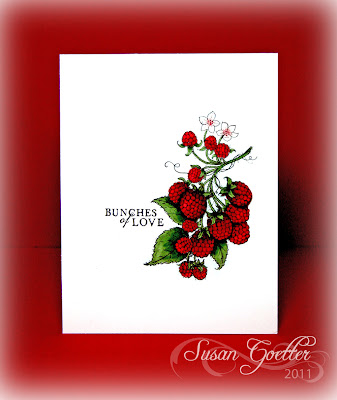 My second card was made using some Flourishes stamps called Berry Sweet.  I stamped the image directly to the card base. The sentiment is from the same collection.  I used the same Copic markers to color the raspberries as I did to color the strawberries, I just used a lot more of the darker colors.  After coloring the image on the card, I stamped it again on card stock and colored just three of the berries. I cut them out and pop dotted them over the original colored berries.  Love how this one turned out! 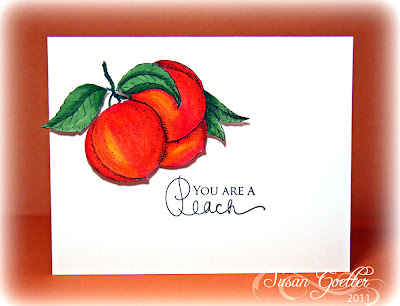 The last card I made this morning is a single layer card base.  Images are from Flourishes Peaches and Cherries collection. I inked and stamped just the stems of the image to the card base. Then I stamped the peaches on another piece of white card stock and colored them with some oranges (YR 17, YR64, & YR2) and red (R24) Copic markers. The leaves were colored with the YG63 and YG67 Copics.  I cut out the peaches and the leaves and pop-dotted them on the card to match up with the stems that I stamped earlier.  The sentiment for this card is from Papertrey Ink.
Sharing another layout I made recently.  This is photos of our granddaughter, Audrey.  She's sometimes a girly girl...and sometimes a bit of a tomboy! 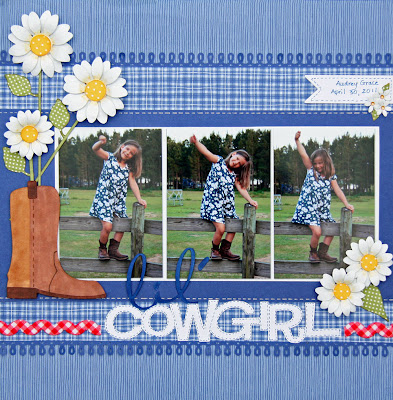 I used some old papers from my stash...no idea who makes them. The daisies were made with a Lifestyles die. I made two of each bloom, rounded the ends of each petal and then layered two blooms together to get a little dimension. The leaves were cut with a Spellbinder leaf die and the stems are just thin cut strips. The yellow centers were punched from scraps. The boot was cut with the Silhouette and pieced together, then colored with Copics. The title work was also cut with the Silhouette (love that machine!). I added the pop of red with some gingham rickrack from my sister's stash. The loopy edges were punched with a MS punch. Tag on the upper right was cut with a Spellbinder banner die. I added three tiny punched blooms with bling centers to the tag. No journaling on this other than her name and the date.
Thanks so much for stopping by! Your comments are welcomed and greatly appreciated!  Until next time....
Hugs!

Hi susan
These are absolutely wonderful, I love them all
Have to say the second is magnificent
thanks so much

Wow these are just beautiful!

All lovely projects, love the strawberries in a jar

They are all brilliant. I had to look long anf hard for ANY fruit digis, but I have now added a few more! Val

These are all fabulous! Amazing colouring and perfect layouts. xx

Wow loved the colouring and the bow just sets it off beautifully !- and the others are lovely too!x

Wow!
Loads of fruity card today Susan!
I love them all but the second one is just fab!
Thanks so much
Chrissie
Lady LIM
"Less is More"

You have made wonderful cards!
Nice colouring.
Sarah

These are stunning images made into fabulous cards:) Sandra H

WOW....You have been busy! These are all awsome, I love your fruit stamps & your colouring is amazing. I especially love the raspberry card Hmmmm.....delicious! Fab scrap book page too.
Kaz xx

All 3 cards are striking and gorgeous. Your LO is beautiful too. I really enjoy your creations, Susan!

It's always a treat to visit here Susan but you've surpassed yourself this time! I couldn't pick a favourite from these three fantastic cards and your layout is inspirational.

This is so not fair! You have all the fruit stamps and all the inspiration and I have none:) Joking apart, your cards are amazing Sue and I'm drooling over the raspberries!
Val x

three absolutely GORGEOUS cards, susan!! your coloring of each image is just amazing!!

All great cards Susan but those starwberries and raspberries look good enough to eat!!!
Margaret x

Susan! These are fantastic! I love your fruit cards. I really like the first one, but I think the second one just pips it at the post, it's spectacular. LOVE IT. In fact the third is gorgeous too, but the reds of the first two have swayed me (I love red).
Michelle.

I don't know how you always manage to get multiple challenge cards out and, as always, they are all wonderful. Until now I have managed to keep he PTI set from the first card off of my wishlist - but your card just changed my mind!

Wow Susan, all are just incredible. I especially like all the detail you put into the first - yet its still so CAS! Funny how creative we are even with mistakes, yet the hallmark of a true artist is to work with the "flub" which you did nicely. The extra layer of the card base just makes the whole thing pop!
Bernadet
bernadetscraftblog.blogspot.com

wowzers on those cards! I'm suddenly hungry!! That lo is so delightful!!!

Hi,
all three of them are fab! the second one is my fav.

All fabulous, Susan. Beautiful colouring too! The first is my favourite...think it's the gingham ribbon :-)

Whew what a fabulously fruity set, all delicious! That jar looks very useful for lots of cards and I love the second one, very effective
Anne
x

Gail Is This Mutton? said...

Well first of all your post title had me in stitches :) and then what a fab collection of cards ... they're all beautiful :) You're so lucky have a selection of images to choose from and your LO is such fun too :)
Jenny x

What AMAZING depth of color on these cards!! WOW!

So many lovely cards this week Susan, all of them super too, my fav is the second one I think :O) Viv xx

You are so clever Susan, these are beautiful cards, love your LO with your beautiful granddaughter

Beautiful, every single one. Hazel x

Susan, your cards are fab as always but I love the strawberry one and the addition of the ribbon is perfect!

All your cards are beautiful. I love that scrapbook page also! :)

Fabulous fruity cards!! Love them all but the strawberry card is my favorite!

I wish you could have heard me as I read your post. "Oh, how PRETTY...I LOVE that!" Then a few second later, gasp! "Oh, my GOODNESS! How sweet!" Few seconds later, "Seriously? Three in a row? WOW!" And then the layout? Oh my heavens, too much goodness in one post! I'm about passing out over here! What wonderful fruity cards, Susan!

Thanks for visiting me too.

Each one of these is so beautifully painted! Your granddaughter looks like she's lots of fun! I love the daisies in the boot!

All of these cards are stunning, after long deliberation I decided the middle one wins by a short nose, think it's down to the entiment which goes so well with the image.

Love coming over to see your take on the challenge! Your jar is fantastic and I love that you've added the ribbon. Your other cards and layout are super too. x

Three beautiful cards and a great layout, too! Love the little red bow on your strawberry jar. Ann

Totally, utterly, amazingly STUNNING. I love them all but am most drawn to the peach and I love the way you put that one together.

I don't have ANY fruit stamps - I need to go shopping!!!

Beautiful cards, Susan!! Love the bunch of berries...and amazing coloring on all of them!! Love your lil cowgirl...adorable and so sweet!!

This is a lovely set of cards.beautiful!

All of your creations in this post are fabulous. I so empathise with you about the unintentional inking - I do this all the time. The challenge is to find a way to complete the project and you did that in a inventive way!

Wow all three of your cards are fantastic - lucky you to have some many stamps - LOL I don't have any with fruit (apart from the digi I used for my entry of course!!)

You do enjoy LIM and honor us with your fab creations. After much going back & forth, I've decided on the peaches...maybe because it's peach season in the USA, and I once had a lovely dwarf peach tree that I had to fight the birds over who would get them first. Boy was that fun.

I love the coloring on your cards! The fruit looks good enough to eat. Wonderful work!

I don't know how you always manage to get multiple challenge cards out and, as always, they are all wonderful. Until now I have managed to keep he PTI set from the first card off of my wishlist but your card just changed my mind!