I probably spend too much time on Pinterest, but I've found some of the most interesting things there.  This tutorial is my spin on this Chevron tutorial that I found there recently.  I worked out a way to make varying widths of chevrons and here are the steps you'll need to make your own. 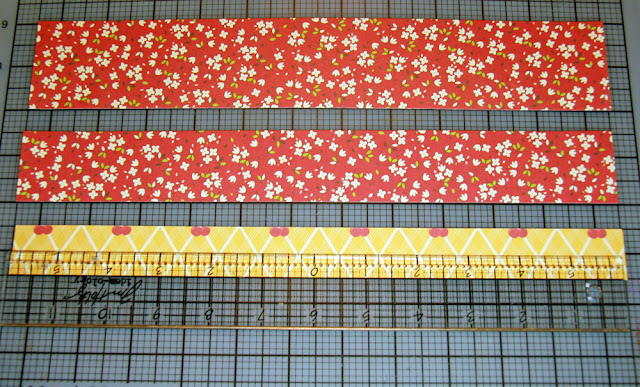 For purposes of my tutorial, I've cut three strips of paper...1 inch, 1.5 inches, and 2 inches.  Basically, you can use any width as long as you follow these steps.  The wider the paper strip, the deeper the depth of the "v". 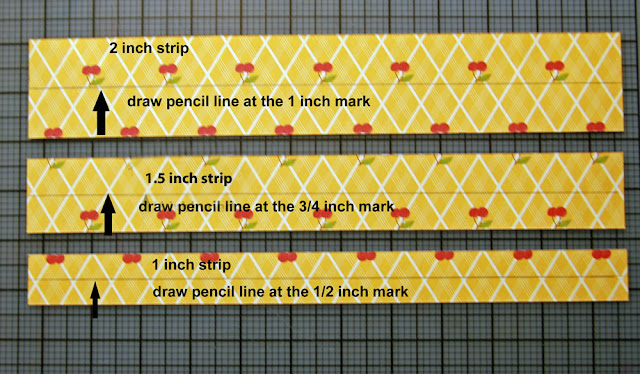 Now it's time to draw some vertical lines.  For each width strip, I've draw a vertical line with spacing the same as the width of half the strip....on the 2 inch strip, the vertical lines are at intervals of 1 inch...and so on.

Now working on the opposite side, you'll be cutting the vertical line that falls between the two cuts above...do this on the length of the strip.  When you finish, you should have sections on each side of the center line that have two squares each in them.

Now comes the folding part...as I mentioned, each cut section on either side has two squares in it.  Fold from the outer edge to the center vertical line in each section.  Do this all the way down each side.  If you've cut it right, you'll have a chevron forming with each new fold.

This is the front side after a few folds on the back.

Maybe with this close up you can see a little better....

No matter how much you crease your fold, it won't lie flat.  My solution to that was to add a drop of fast drying glue to the back side of the paper under each triangular fold and press it together...and then it will lie flat. 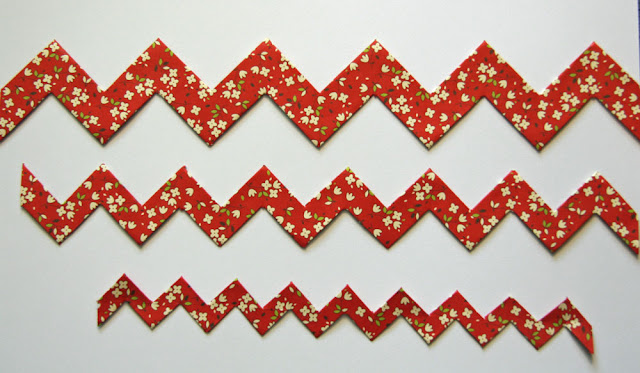 Here's the finished pieces.  I noticed in the original tutorial, stitching was used to hold the chevron flat.  I kind of like it without the stitching.  You'll also notice how the different widths of paper made the different sized chevrons.  They don't take long to make...and they'd look great on a card or a layout.

Hope this all makes sense.  Thanks so much for stopping by!  As always, I appreciate your comments! Until next time...

Email ThisBlogThis!Share to TwitterShare to FacebookShare to Pinterest
Labels: Tutorials

Thanks so much for sharing this great idea - look forward to seeing what you do with them next.

What an AWESOME tutorial!!! Thanks sooooo much for sharing it!!!

Hi Susan, I've looked at quite of few of these tutorials and they've not easily made sense to me and put me off of trying.
Thank you so much - your tutorial is much easier to understand and hopefully I'll get a chance to have a go soon!
Fabulous tutorial, wonderful step by step instructions and easy to follow hugs Karen x

I love the idea of chevrons, but, honestly, I am much too lazy. Your's are great and thanks for sharing.

Wow, that is a great tutorial, thank you so much for making it so clear. I LOVE this look, and will try it out soon.

I've got to stop looking around your site or I'll never get anything done! ;-) I don't even make cards or scrapbooks, but I'm dying to try this.

Contents of this blog is shared for personal/non-commercial use and inspiration only. Thanks!