I'm on a roll today!  This is my third post!! I can't believe it....now I really need to go prepare something to feed the family for dinner....they're beginning to growl!

The Less is More challenge this week from Mandi and Chrissie is to create a card that is not a rectangle or a square...in other words...a shaped card.  I've done my usual this week and made several for the challenge...so off we go.... 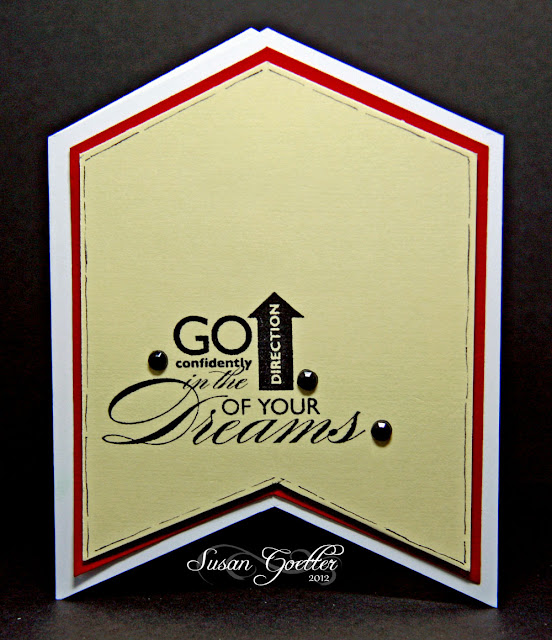 I had the idea to make a card in the shape of an arrow...got the card shape cut out and then didn't have a clue what to do with it! LOL!  So, I cut a red mat...then I cut a yellow mat. Bear in mind that this is all cut freehand, so it's not exactly even.  Suddenly...I had a light bulb moment!  I ordered this set of sentiment stamps from SU (thank you Bonnie!), and I don't believe I've ever inked it up because once I got it, I couldn't figure out what to do with it...and now...look at this! A PERFECT match!  I added a few pieces of bling....why?...because I could! 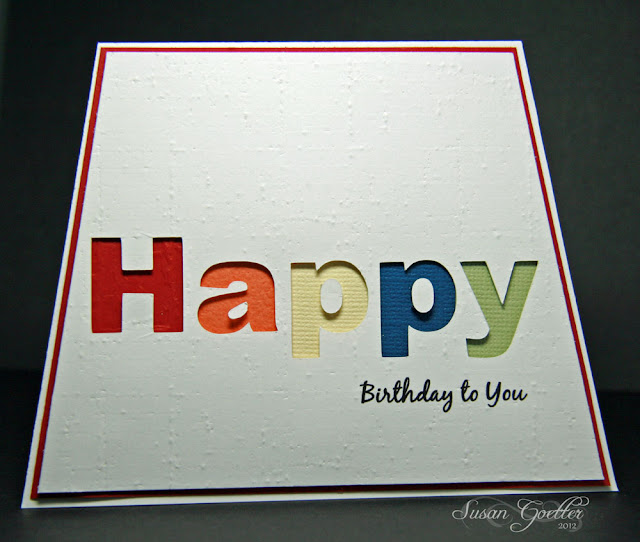 My second card is shaped like a trapezoid (did I spell that right?)  I had something in my mind that I wanted to try...so off I went!  I cut the letters from white card stock with the Cameo.  After I cut the word "Happy" out, I ran it through my computer to add "birthday to you".  Then I ran the cut piece through the Cuttlebug and embossed it with a template from PTI.  I did it on the wrong side of the card stock, then had to run it through again...but I kind of like the effect.  I guess I should tell you what I did wrong.  I cut the word "happy" planning on using a rectangle shaped card (DUH!).  I totally forgot about the requirement that it be a "shape".  I finally decided that I could trim off part of each side and make it a trapezoid.  I added a red layer to the white card base.  Then I took a strip of card stock and adhered red, orange, yellow, blue, and green strips to it to put behind the cut out letters.  That part is a little tricky, because you can't get the strips too wide or they creep over to the next letter...but I finally got it!  I adhered the strip with the colors on it on top of the red background, then added the "happy" layer on top with pop dots.  I will say that getting those little inside pieces on the letters was a little tricky too.  Sounds like a lot of work, but not really...the worse part was trying to figure out how to make a shaped card after I had already cut the word out! 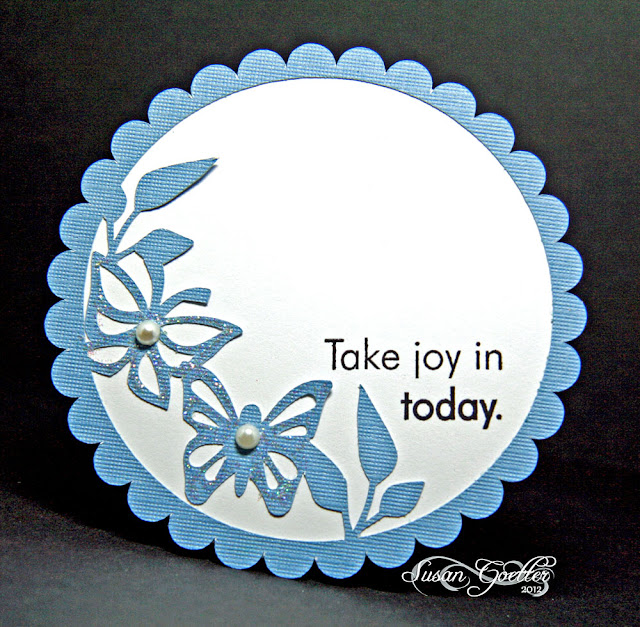 This card was cut out totally on the Cameo.  I cut a circular card base by making two identical circles and merging the edges together (in the Silhouette program). Then I simply scored it and folded.  The blue part is a frame that I cut with the Cameo.  I made sure that the circle card base would bit the blue part so that the blue would adhere to the card base and not have the card base stick out as far as the scallops.  The Cameo is a FABULOUS tool!  Added a sentiment from PTI and a couple of pearls and a touch of glitter....done! 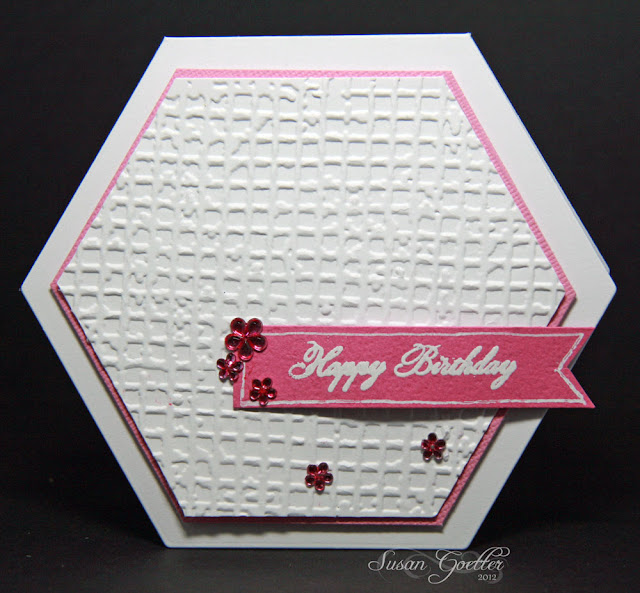 Didn't like this one as much as I thought I would.  Very simple...just cut the card base with one of the larger dies in the set, then cut two smaller shapes in pink and white.  I ran the smaller white hexagon through the Cuttlebug with a TH embossing folder.  Added a sentiment (PTI) and embossed it in white.  Added a few flower bling that I colored with Copics. 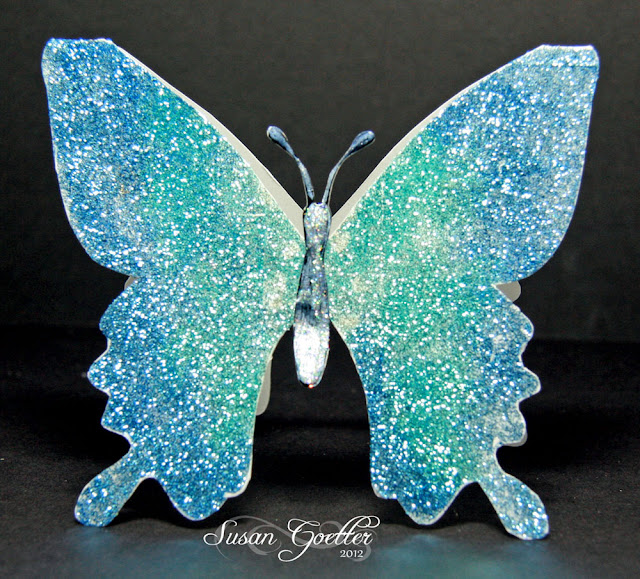 Okay...this one didn't turn out like I thought it would AT ALL!  I used my Cameo and made the card shape by making a mirror image of the butterfly and welding it together at the top of the wings.  I covered the top butterfly with double-sided tape and then sprinkled three different colors of glitter on top of the sticky tape. I cut the butterfly body separately and then popped him on top of the card front.  Can't imagine where I'd add a sentiment!  So I probably won't ever use this card...but it was a learning experience.  In case you're wondering...don't try to add the double sided tape to the card stock and THEN cut it with the Cameo...it doesn't work....just ask me how I know!

Okay, okay...I'm done now! Thanks a million for stopping in! I truly appreciate your wonderful comments!   Until next time...

Hola Susan, my friend you're a really little laborious card bee, fantastic set of cards, the first one is GREAT, i love it, a clever idea with the stamps...i think i need to start write my Santa letter because i need this fantastic cameo:D:D:D:, wonderful job Susan.
A hug from the other side of the ocean

What a great selection of cards - I particularly like the scalloped circle card. Jeannie x

Hi Susan, gosh you have been busy, my favorite is the 'direction' card its an unusual shape and the sentiment is perfect.

Pretty cool! You did spell trapezoid right, and I think it is a fun card, but my fave is the arrow.
I'm going to try an interesting shape the next card I make...

My word, what a wonderful selection of cards Susan, I really can't choose a favourite, they are all so innovative!
Thanks so much
Chrissie
"Less Is More"

fabulous set of shaped cards. I especially like the first one. :) Ann

Morning Susan, Another array of cards and they are gorgeous!!:)x

What would we do without our Cameos !!!! Love your cards and your clever designs , all of them are gorgeous and thanks for the tips and hints .

HI Susan....what a lovely selection of shaped cards...my favourite is the butterfly one

Wow! I really love your arrow pointing up and that glittery butterfly is stunning! I think I may have to play along.....

it is always so much fun to look and see what you have created for the LIM challenge, susan! each card is amazing, but i do really like the first one the best, i think!

Wow Susan, you certainly have a terrific variety of cards to share. I love the butterfly too, wonderful colours, so bright and joyful! Have a lovely Sunday Susan.

Wow Susan - you have been having fun! I love them all but do like the trapeziode. I took the silhoutte online class and can see how much easier it is to use than the cricut - so I'm going to bite the bullet and get one of those too - I know it's naughty but I actually think I'll use hte cameo more....

So much to choose from Susan, a fabulous selection! I think the arrow one is lovely, so original and I love the sentiment!
Val x

Wow another brilliant bunch of cards! The arrow looks great and I love that sparkly butterfly.

To cut a triangle, take a regular rectangle card, cut it with a ruler from top LH corner (by the fold) to the other long side. Then cut from the end of that back to the fold to make the shortest side.
It's far quicker and easier to do than to explain!

Such inspiration here as always Susan! The arrow card is brilliant - I don't make shaped cards often, but I can see myself using this.

I was going to use the craft robo but I haven't really mastered welding yet so stuck with the cuttlebug LOL! Great cards here and so productive and I can only imagine what happened with the tape and the cameo!
Linbyx

Once again you have made us SO many cards
i relaly need your imagination Susan!
All fantastic
LOVE the first

Thank you very much
mandi
"Less is More"

WOW Susan you've been busy:) love the variety and detail of them all!

Fab cards - but I love the arrow one!

Oh Susan - you raise my heart..... these cards are gorgeous and I love what you've done with all of them.

Wow, you have been busy! There are so many great cards here! I love that sparkly butterfly and I'm sure there will be an occasion that it would work for - a little girl would love it for their birthday, I'm sure (or a big girl.. ok so I would love it!!!) Love the negative "happy" too though it sounds like hard work! M x

Wow, you have been busy Susan. I love all of these shapes, but my favourite would have to be the hexagon. I really love the simple lines and touch of colour.

Wow what a fabulous set of shaped cards. Love how you've made them all different. x