This week's challenge at Less is More is to create a card using the following sketch: 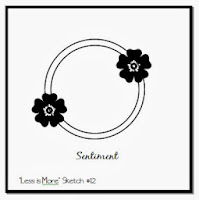 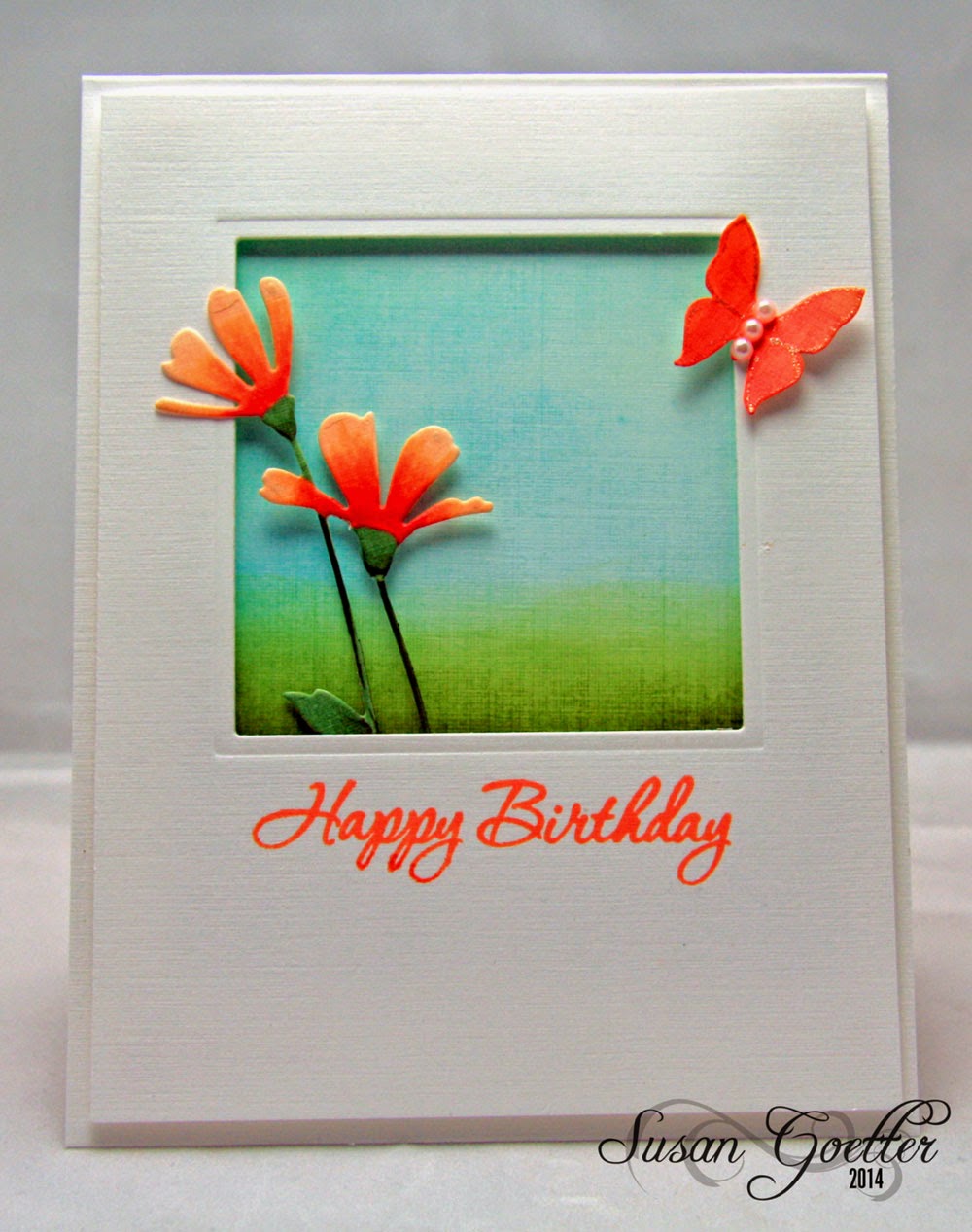 I used a linen card stock for my card.  I cut a square from a 4 x 5.25 panel and embossed the frame using a Spellbinder die.  The flowers are a die from Simon Says.  I cut the flowers from white card stock, then colored them with Copics.  For the background, I sponged a piece of the linen card stock with DI - salty ocean and mowed grass.  I adhered the flowers to the back of the front panel and then pop dotted the panel over the sponged background.  As a finishing touch, I punched the butterfly with a MS punch, colored it with Copics to match the blooms...added a few small pearls for the body and adhered it to the card front. The sentiment is stamped with HA Orange Soda using a stamp from HA.

I haven't shared any of my scrapbooking in a while, so I thought I'd start sharing a few layouts at the time.  I did this layout quite a while back, so I don't really remember much about the papers I used. 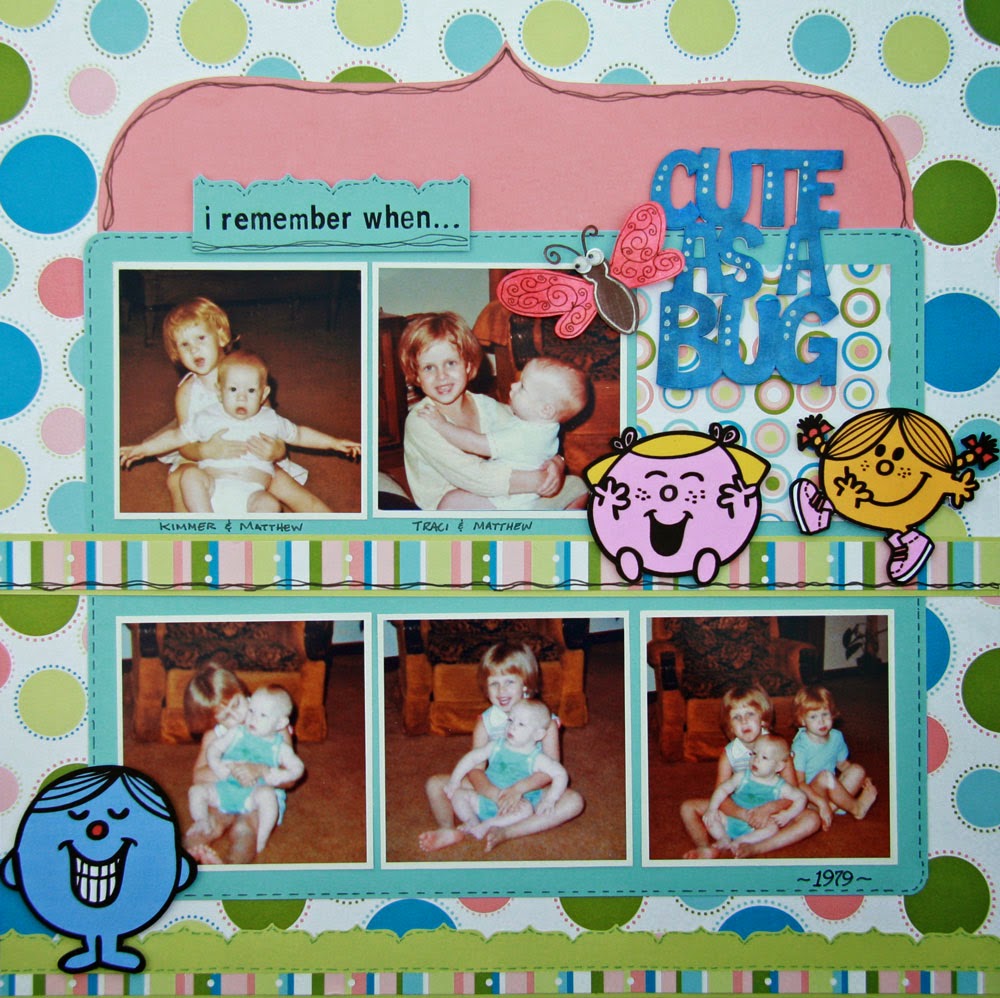 The little happy face people were cut using a Silhouette file.  I added color to them in the Silhouette program then used the print and cut feature of the program to cut them out.  The title work was made in the Silhouette program also.  I cut out 4 layers of the words, then glued them all together for a chipboard effect.  The little dragonfly was also a Silhouette cut file.  These are old photos of my children when they were quite young.  I believe my oldest was about 4 1/2 years old, my middle daughter was about 2 1/2 years old, and my son was about 6 months old.  Time has FLOWN by!!! They're all in their 30's now!!

I've noticed quite a few "box" cards recently and I was intrigued, so I thought I'd give it a try.  I made one the other day for one of my granddaughters, and forgot to take a photo.  I have another granddaughter with a birthday on Sunday, so I made this one for her. 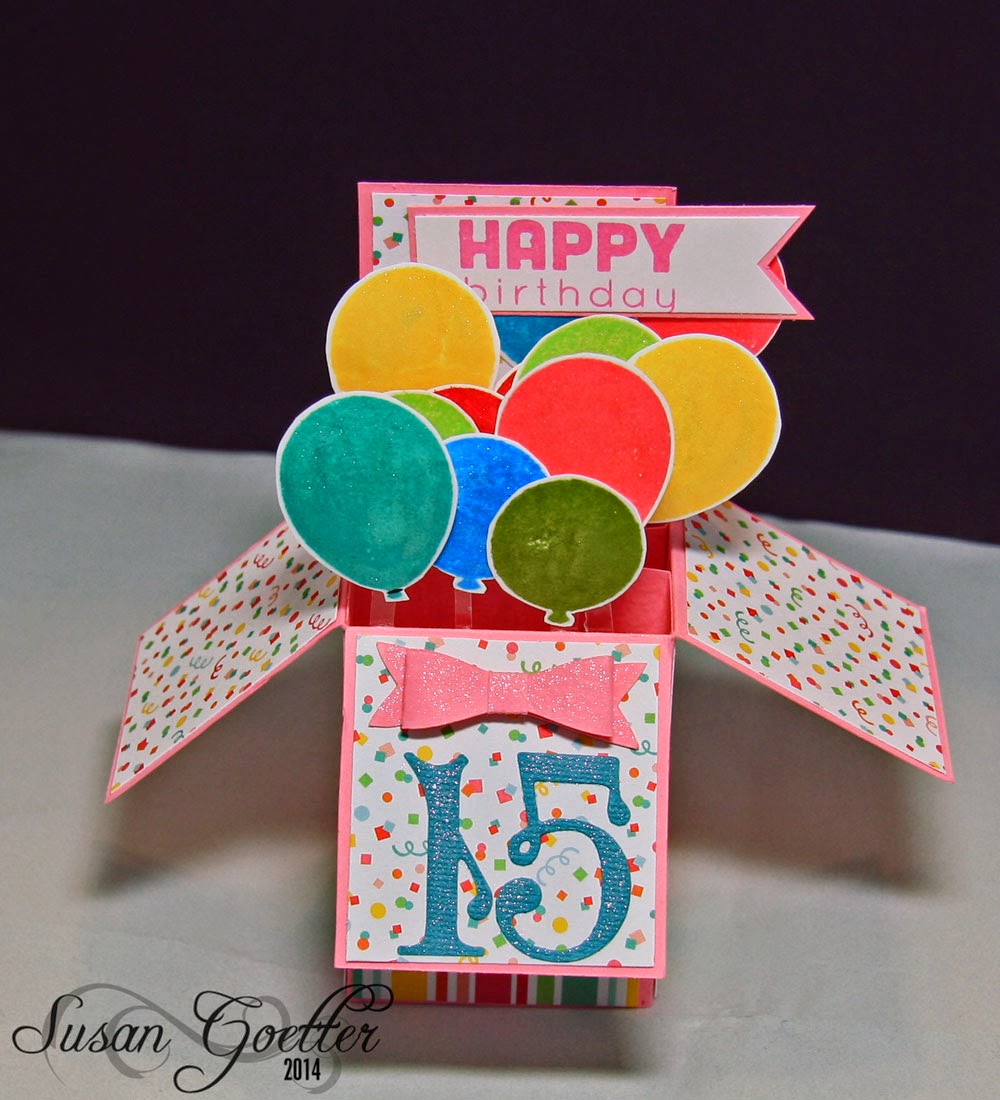 I used some American Crafts papers to decorate the pink box.  The fifteen was cut with some Quikutz dies. I cut the little 3-D bow with the Cameo.  The balloons were all stamped with a Simon Says stamp and cut out by hand...(I think I should have ordered the die that goes with these dies!)  I attached the balloons to thin strips of acetate and adhered them to the inside of the box.  Each of the balloons were painted with my wink of Stella clear glitter pen.  The "happy birthday" tag in the back was stamped then hand cut and adhered to the back of the box.  The back flap of the box does not fold down and I added a piece of plain white card stock to the back of that panel to stamp a sentiment...and I also included a little pocket on the bottom of that panel to slip a little money into. 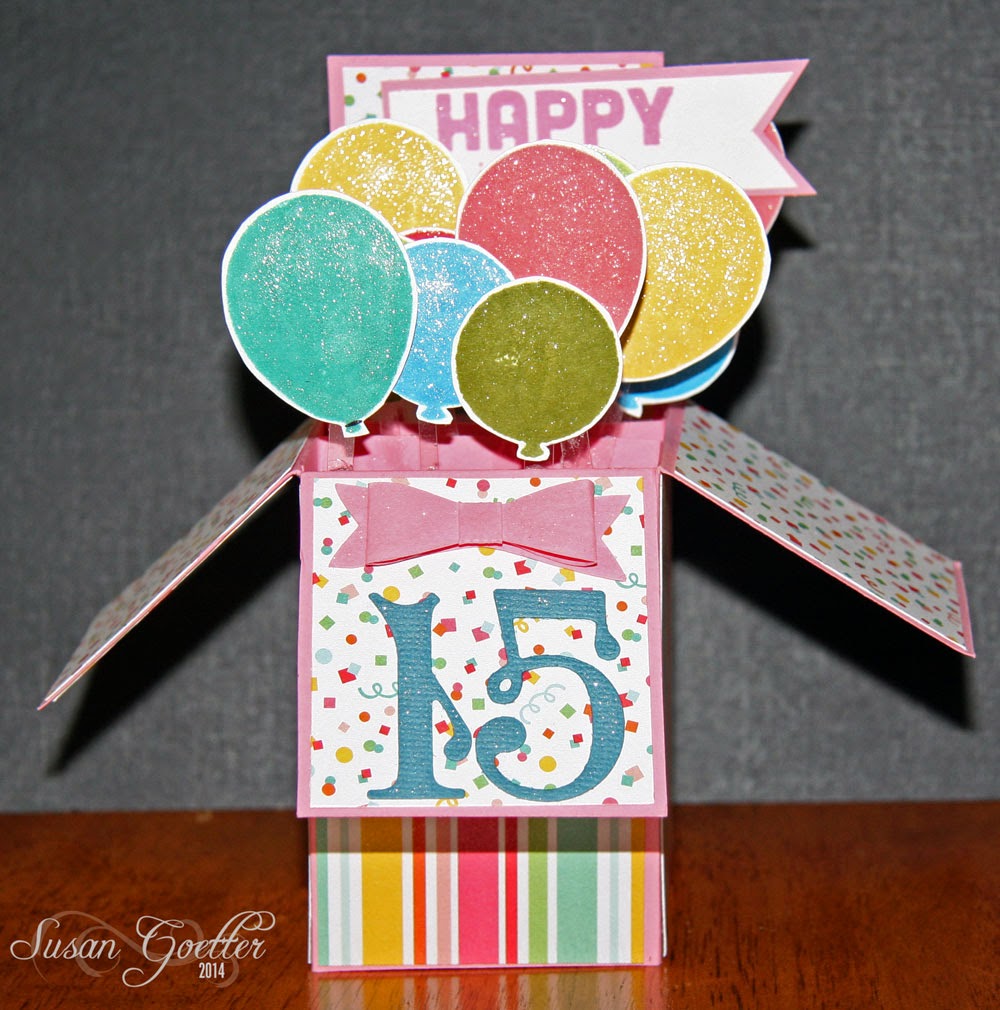 Here's another view that you can see the shimmer on the balloons a little better.  I think this makes a really cute card and I'll probably make another one soon! If you're looking for a tutorial to make this box there's a really good one at Splitcoaststampers.

I made another card that works for the Less is More challenge this week   The theme this week is Makes me smile! It's simply that... something that makes you smile.  Well, no matter how often I use this adorable Penny Black stamp...it never fails to make me smile. 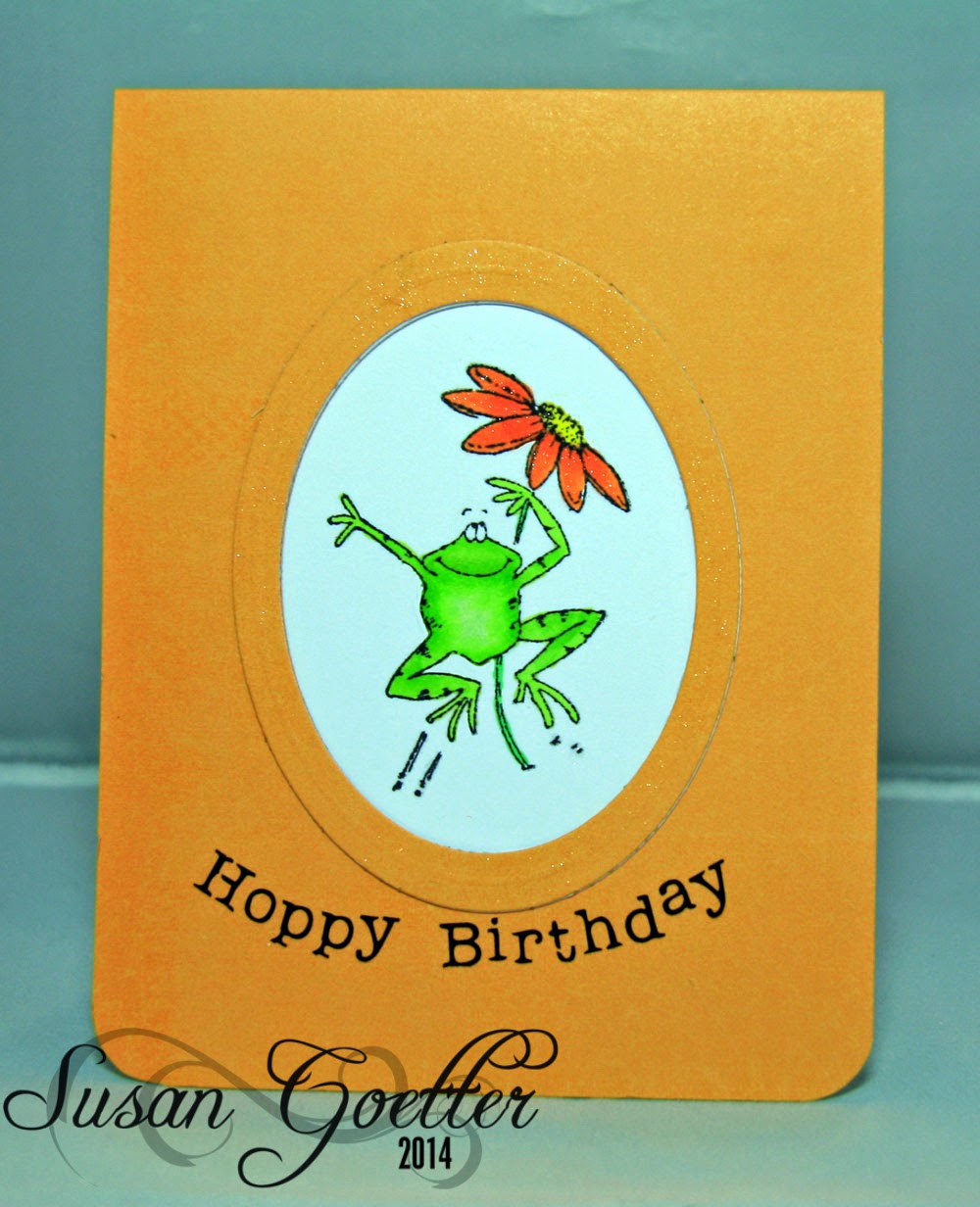 I used a piece of sunny yellow for the card base.  I die cut an oval and adhered a white panel behind the oval.  I stamped the frog in the center of the oval, and colored him with Copics.  It's difficult to see here, but I also added some glitter with the wink of Stella clear glitter brush.  The sentiment was computer generated...and it's slightly off-center...but it's done now!  I used the font - problem secretary...which is also a bit of a "wobbly" font.  I cut an oval frame slightly larger than the oval center and adhered it to the top of the oval.  I also added glitter brush to the frame.  I rounded the bottom corners with a 3/8 inch corner rounder.