I have several cards to share today.  I seem to have a problem getting photos of my card and because of my laziness procrastination, I've missed a couple of challenges!  These first two cards are for the current Less is More challenge which is a one layer card with animals.  The second card is for the current CASology challenge with a cue word of "tropical". (and I think I'm squeaking in just in time!) 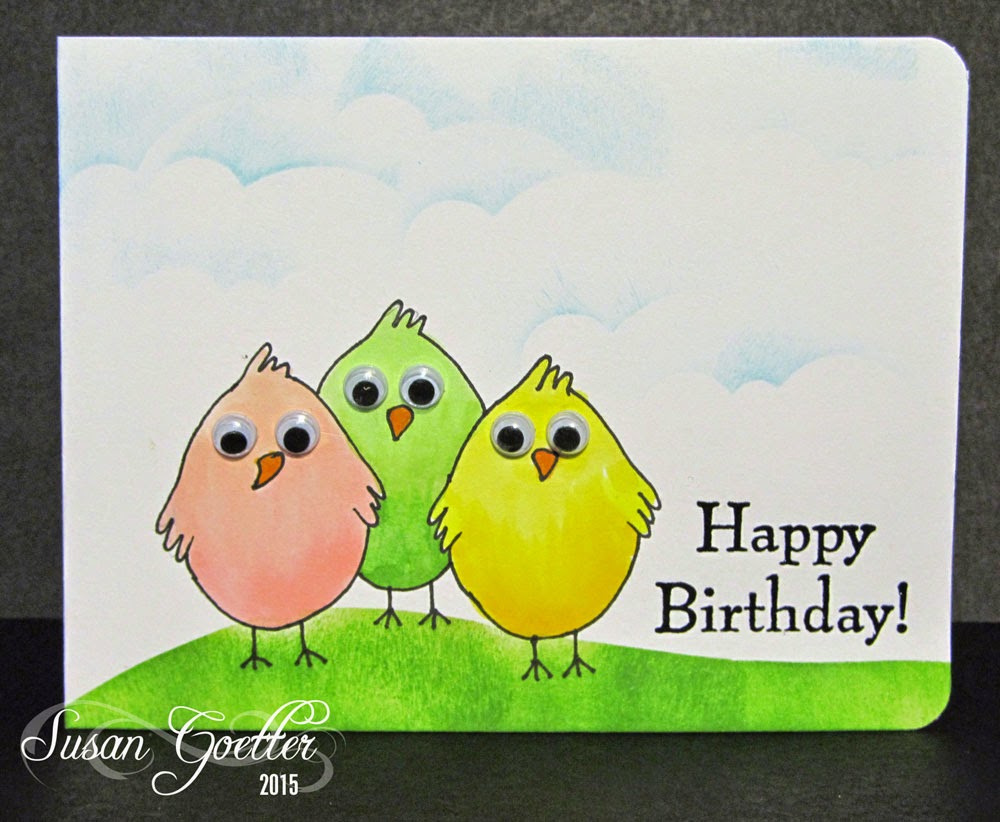 This is my one layer card for the LIM challenge.  I decided to draw several little "chicks" as I couldn't find a stamp I wanted to use.  Chicks are considered animals....right??  Anyway, I drew the chicks, colored them with Copics, added googly eyes, and masked off a little green hill to ground them.  Then just a touch of blue for the sky.  Very quick and easy...even though my little chicks look a little startled! I can't say I'm a great artist...but I try! LOL! 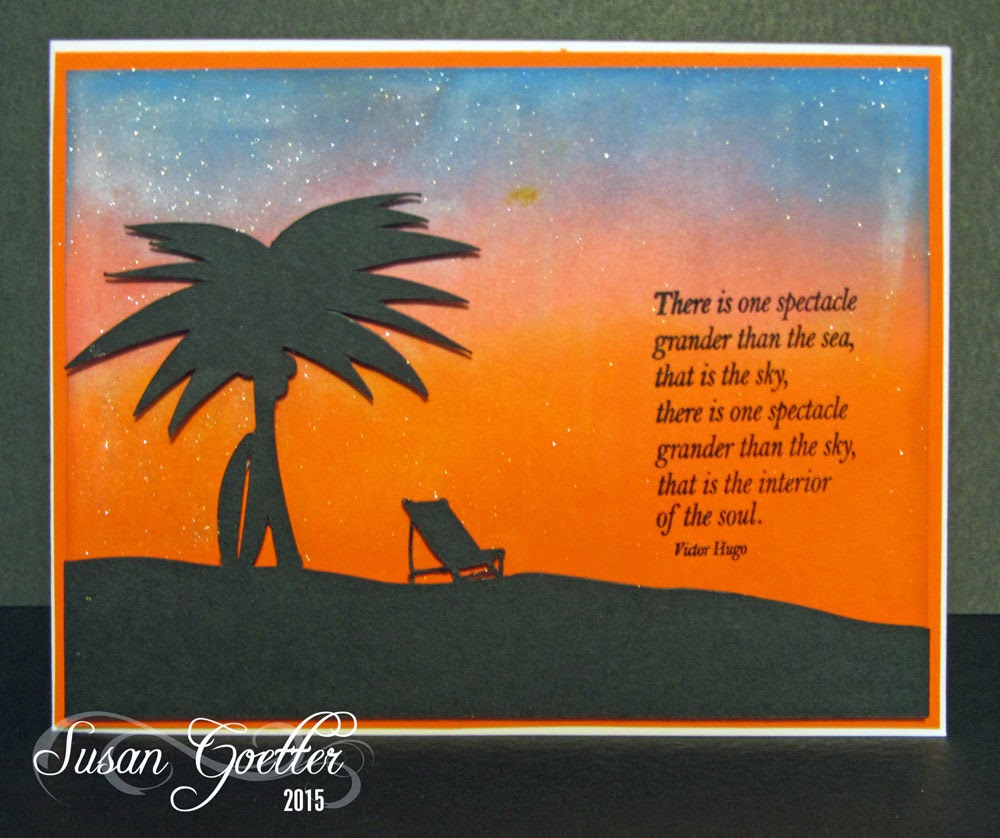 I hope this "tropical" card is CAS enough!  I cut the silhouette (chair, tree, ground) with my Cameo.  I used distress ink to shade the background, then stamped the sentiment in black and heat embossed it in clear embossing powder. I should have left well enough alone...but decided I "needed" a little sparkle in the sky, so I put clear Wink of Stella on the sky...kind of looks like stars!  The sentiment is from Flourishes - Beach Life (unfortunately Flourishes no longer exists!)

This next card is the one I made for my grandson who will be eleven tomorrow. 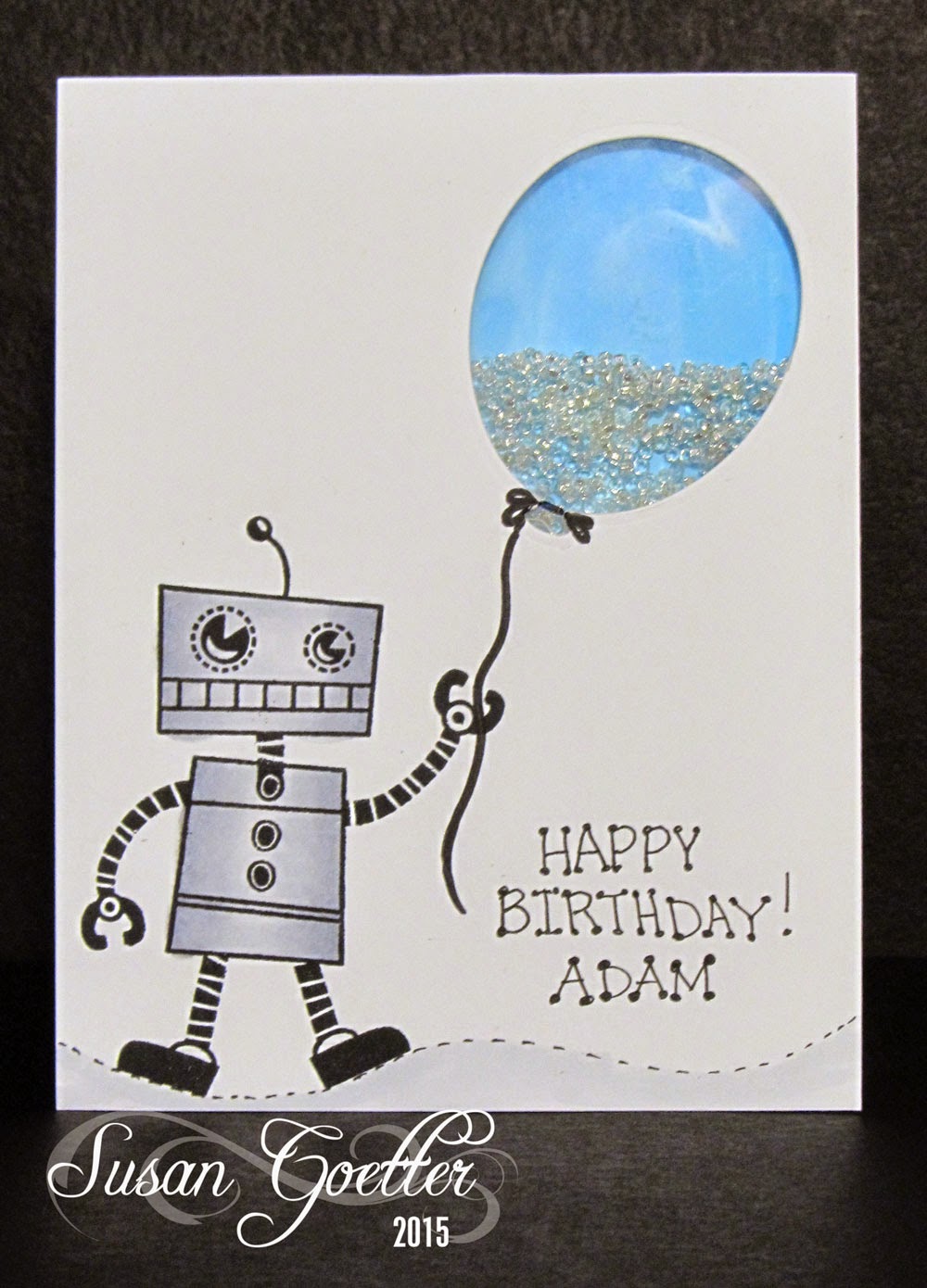 I wanted to make a shaker card, and I've had very little practice, so I gave it another try!  I cut the balloon from a white panel, then cut two layers of fun foam and adhered them to the back of the panel, aligning them with the opening.  I added tiny seed beads inside the balloon.  On the card base, I colored a blue rectangle to go behind the opening.  The robot is a MME stamp and is colored with Copics.  I added a dotted "ground" and colored it with a light grey Copic.  The sentiment is hand written. I hope he likes it and doesn't think it's too "childish"!

These next two cards were cards I made for last week's LIM challenge...but once again I was lazy didn't get photos in time! 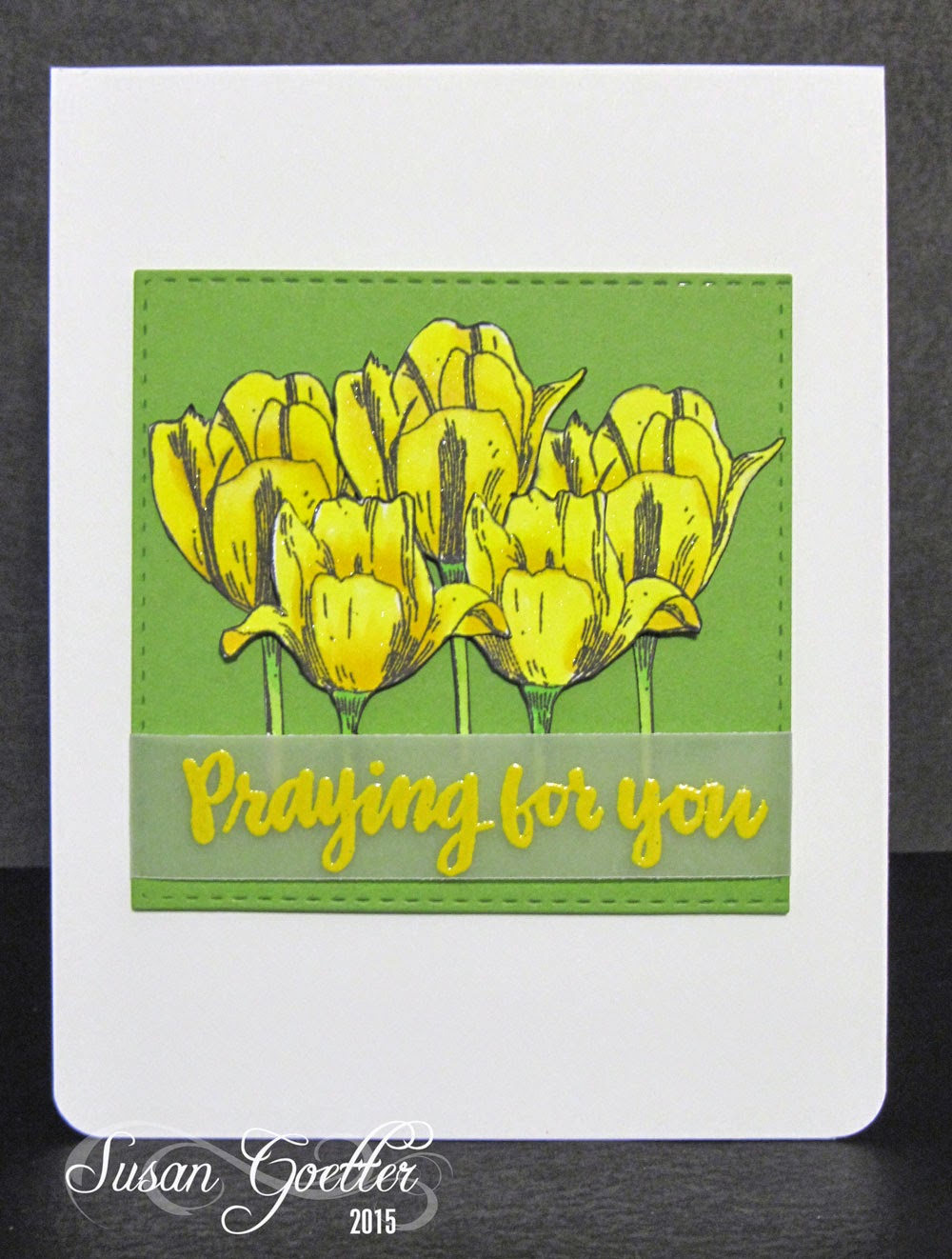 The tulips are a stamp from Penny Black, that I stamped in Memento black and colored with Copics. I fussy cut each of the blooms and then layered them on the green panel.  Some of the tulips are popped up for a little dimension. The green panel was cut with the rectangle stitched die from SSS, but I did some partial cutting in order to get a more "square" shape.  The sentiment is from SSS and is stamped on vellum and heat embossed in yellow. 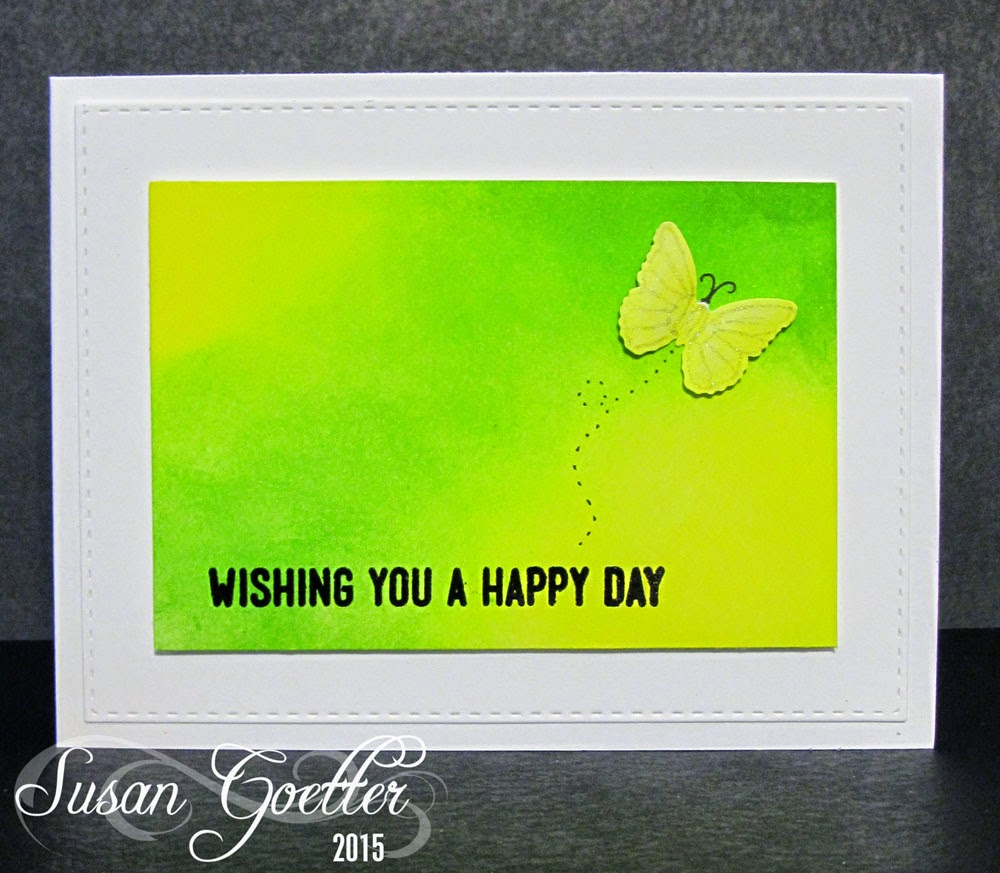 This card is the result of my playing with some of my distress inks and trying to figure out what I could do with the inked panel after I finished!  Can't say I really love this card, but I do like the bright colors!  The sentiment is from SSS (I think), and was stamped in black then heat embossed with clear embossing powder.  The butterfly was punched with a MS punch then coated with a little wink of stella.

Whew! That was a lot to drop on you today! Thanks so much for taking the time to stop by for a visit!  Hope you'll come back soon!  Your comments are greatly appreciated! Until next time...

Playing Along with THREE Challenges!

I thought I'd play along with a couple of challenges today.  The card I've made today actually works for three current challenges! Yay me!  This is not something that I manage to do very often!  The three challenges are:  Merry Monday Christmas, 52 (Christmas) Card Throwdown, and Addicted to Stamps.

Addicted to Stamps
CLEAN AND SIMPLE

So....here's my card for these three challenges: 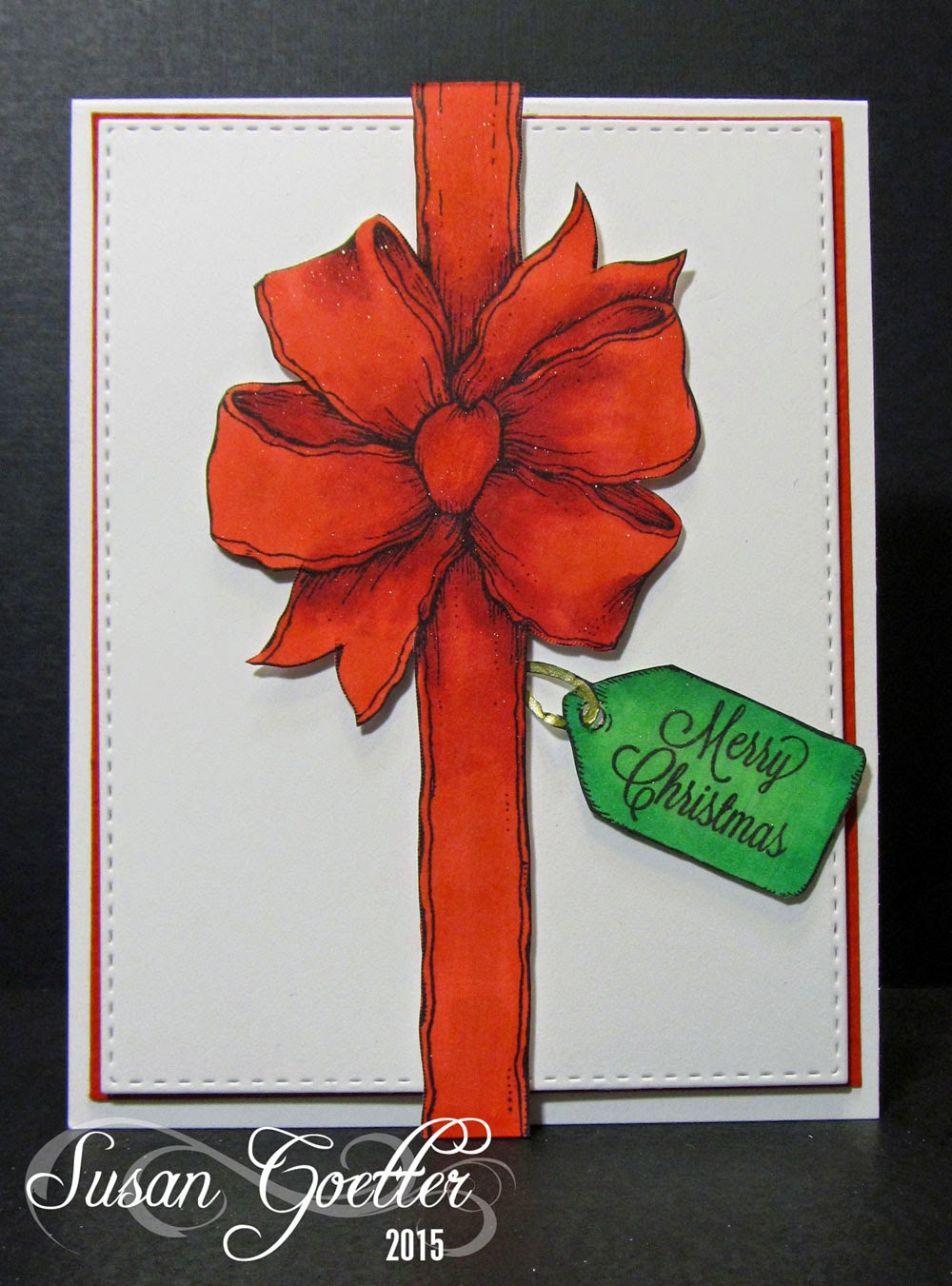 I cut the white panel using a stitched rectangle die from SSS and mounted it with a piece of fun foam to a piece of red card stock which is adhered directed to the card base.  The big bow (with ribbon) is an image from Flourishes (sadly, I think they are out of business now!).  The tag and sentiment is also from Flourishes.  All I did was color the bow and tag with Copics, cut them out, and popped them with foam tape on the white card base.  Super quick and easy!

That's another Christmas card for my stash!  Maybe if I keep playing along with these challenges, I'll have all my Christmas cards done by November!  Wouldn't that be great?