It's a new year....and hopefully, I'll be better about posting this year!

I've been doing a lot of knitting, crocheting, and a bit of scrapbooking lately, and I've finally made a few cards too.

Let me show you some of the cards I've made.  This first card is using some of the techniques from the Clean & Simple Card Class I'm currently taking. 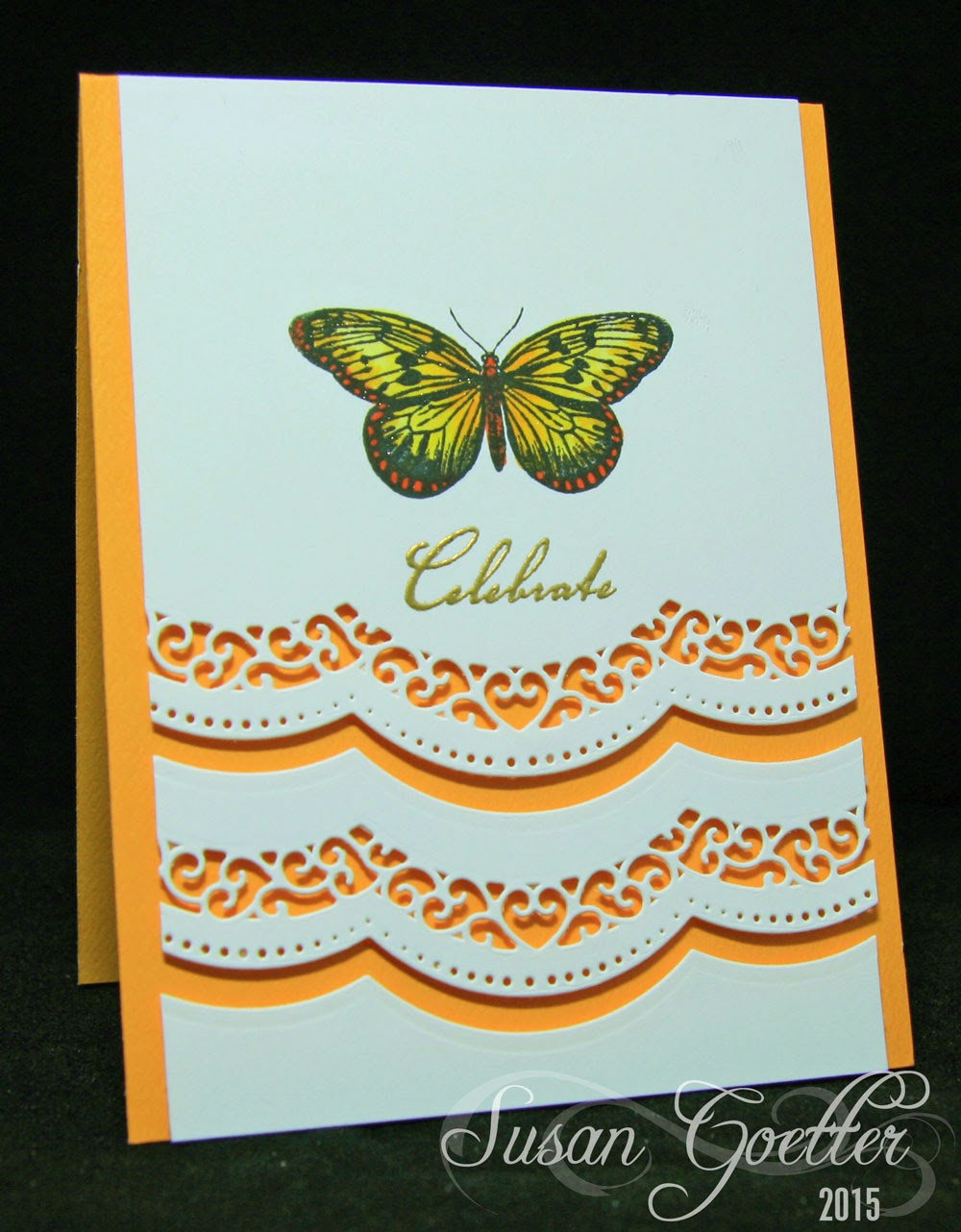 I wanted to dress up my scallops a bit, so I used some of my new Spellbinder border dies to cut the scallops.  The butterfly is from Hero Arts, stamped in Memento black, and colored with Copics.  I added a touch of clear Wink of Stella to the butterfly for a little sparkle.  The sentiment is heat embossed with platinum embossing powder.  Sentiment is from PTI. I popped each layer with foam tape over a gold card base.

This next group of cards are some that I made using techniques from Jennifer McGuire's video for faux laser cut cards which you can find by clicking on the link. 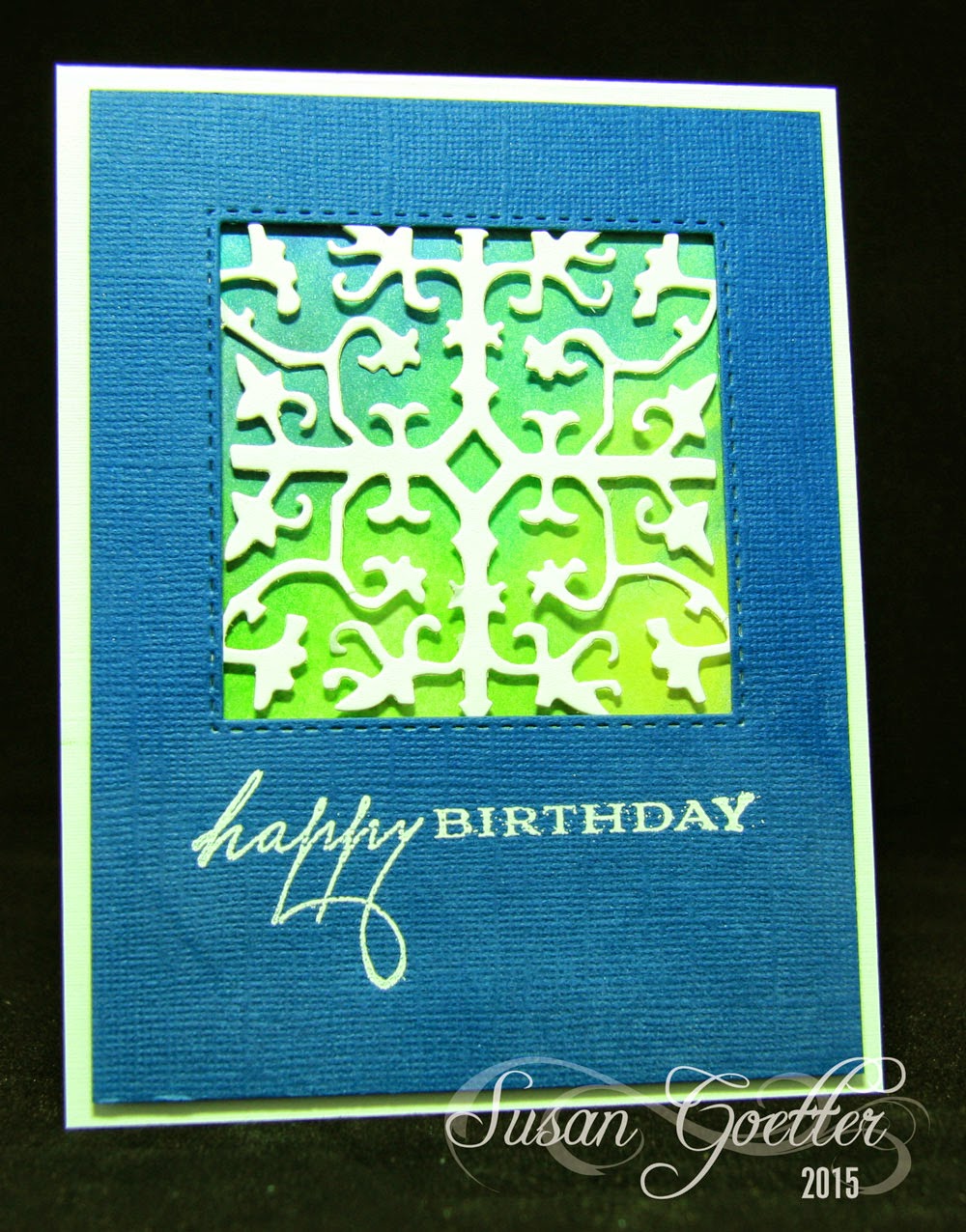 For the lacy inset for this card, I used a Spellbinder die.  The aperture was cut using the stitched rectangle die from Simon Says....I just did a little partial die-cutting to make it a square.  I used a white card base, and did a little blending of distress inks for the background. The sentiment is from PTI and is heat embossed in white (although it looks a little yellow on here!) 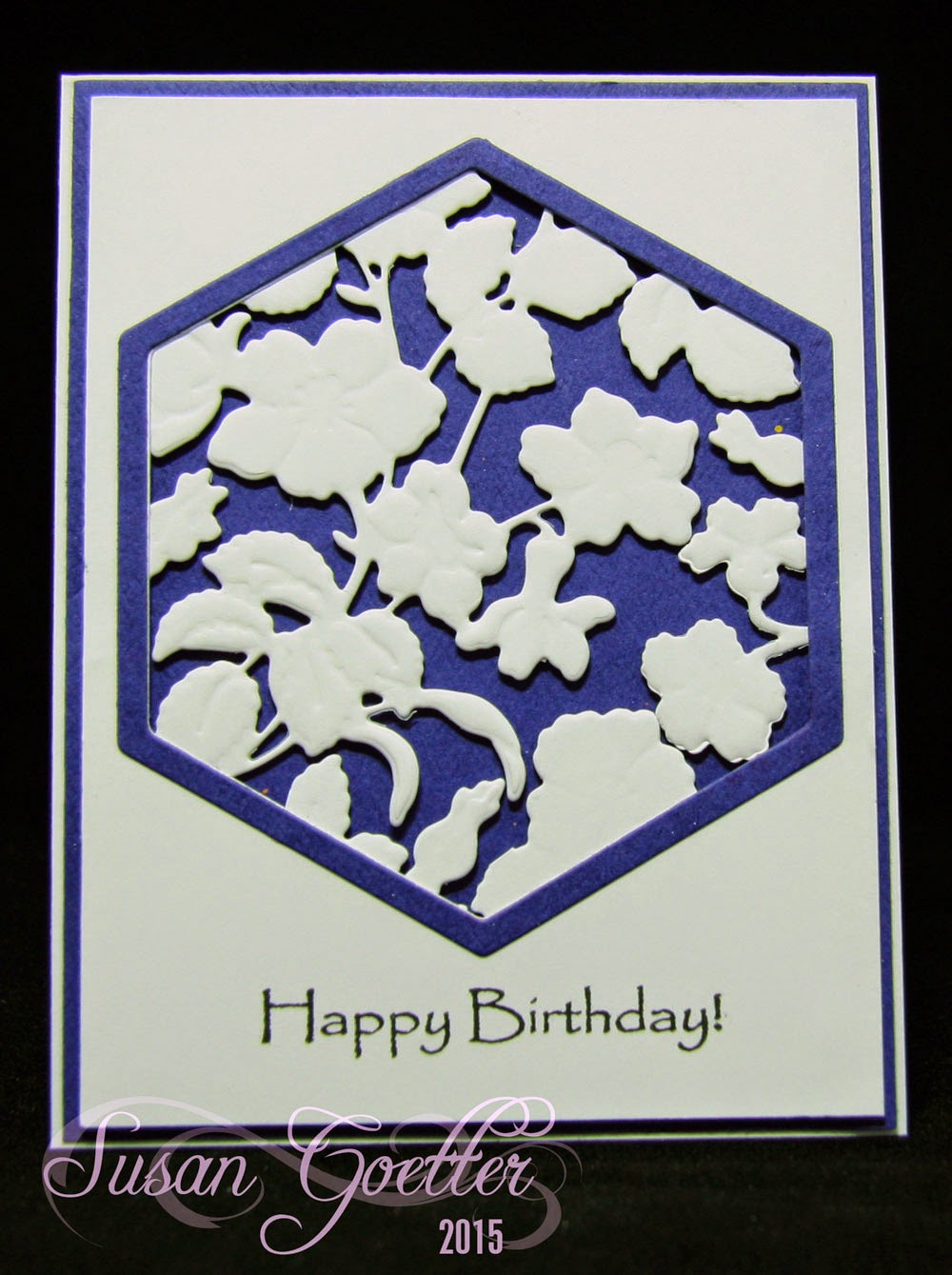 For this card, I used a large hexagon die to cut the aperture, then used the next larger hexagon die to cut a purple border for the opening.  The floral section in the middle is a large die from Anna Griffin and Cuttlebug.  It's really a beautiful die!.  The sentiment is from PTI. 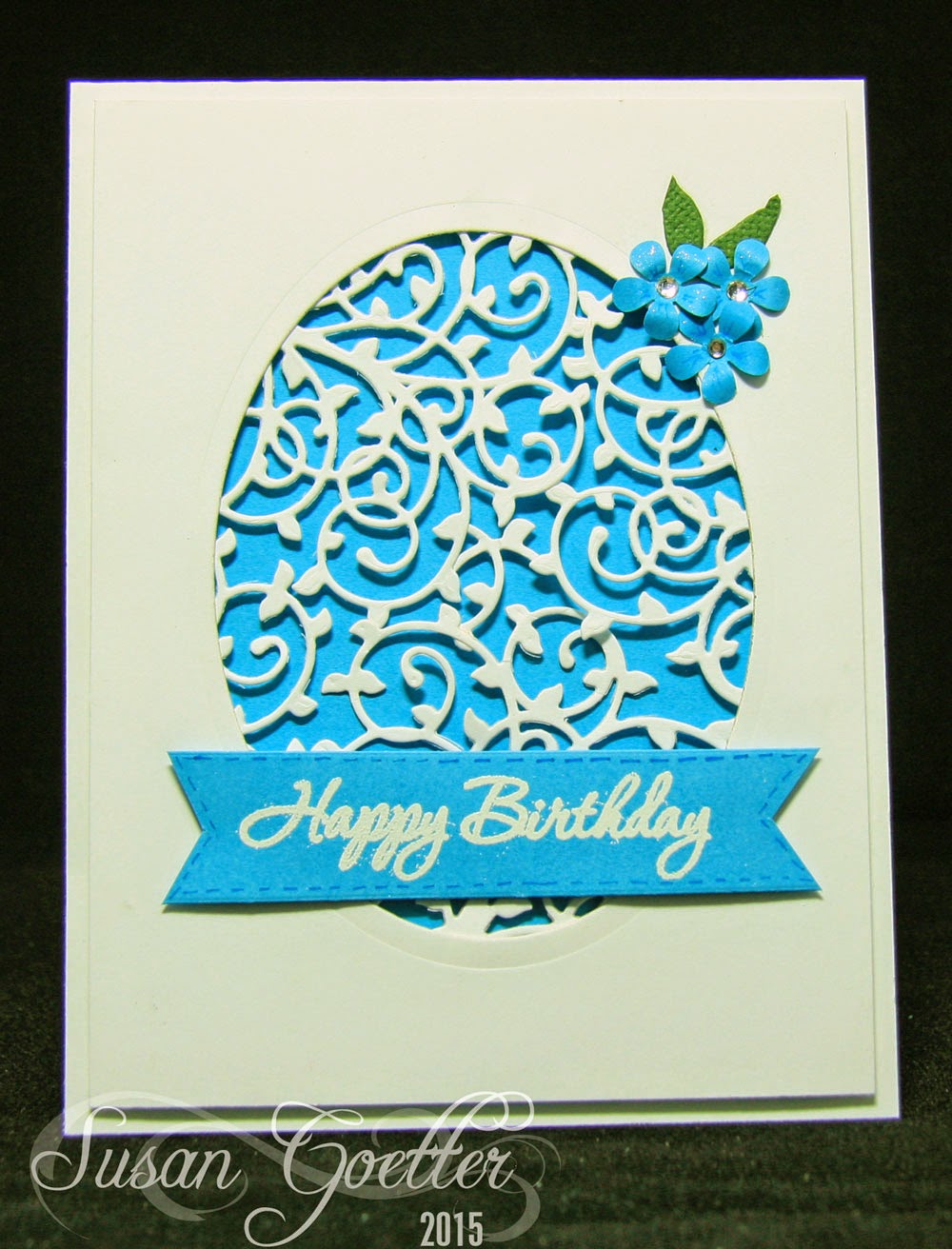 This card is made along the same lines as the two above, except this card's lacy insert is made by using 4 Spellbinder die cut trees to fill in the opening.  I used an oval die for the opening, then filled it with the trees.  The banner was cut from paper to match the backing of the lacy center, and heat embossed with a sentiment from PTI.  I had to add a few small blooms to the top of the oval to cover up an inky mistake! 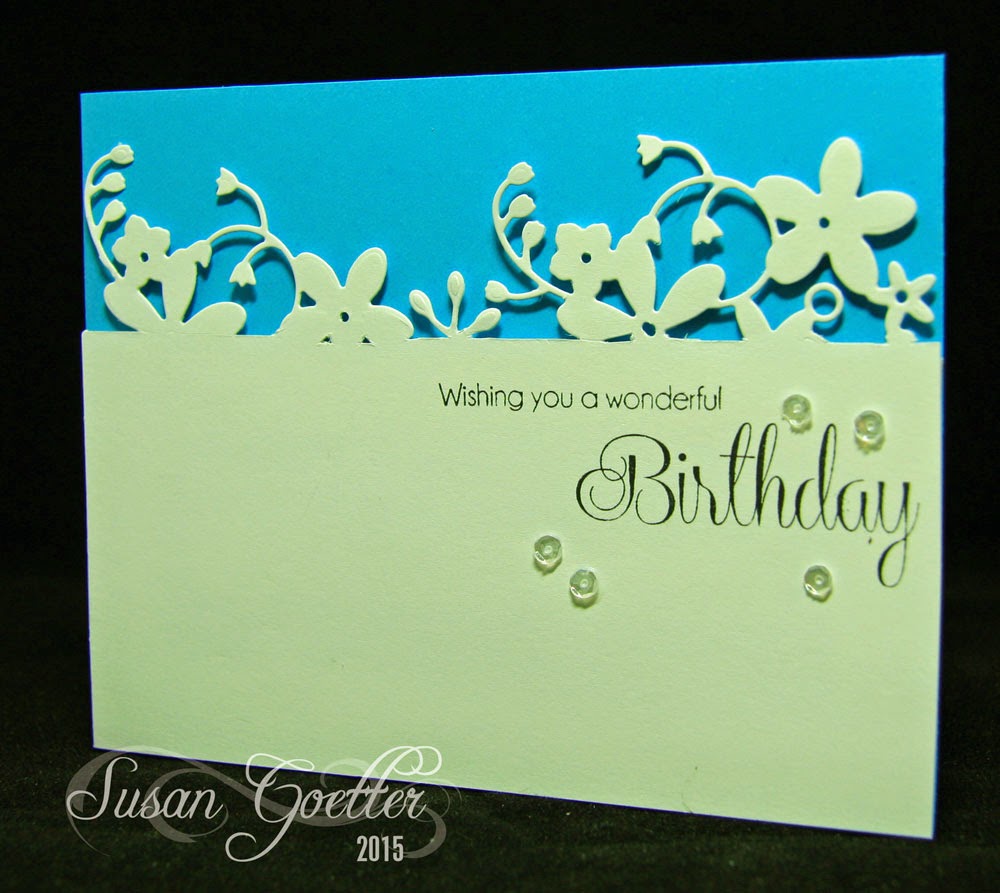 The die is from Simon Says - Calliope Flourish.  I simply cut just a portion of the die and moved it across the paper and cut it several times.  The sentiment is from PTI.  Added a few white sequins to finish it off.  The panel is adhered to the card base with foam tape.

I'm also submitting this card for the CASology Challenge this week....with the keyword of Birthday. I guess I could have submitted most of these cards since I seem to be on a birthday card kick this week! 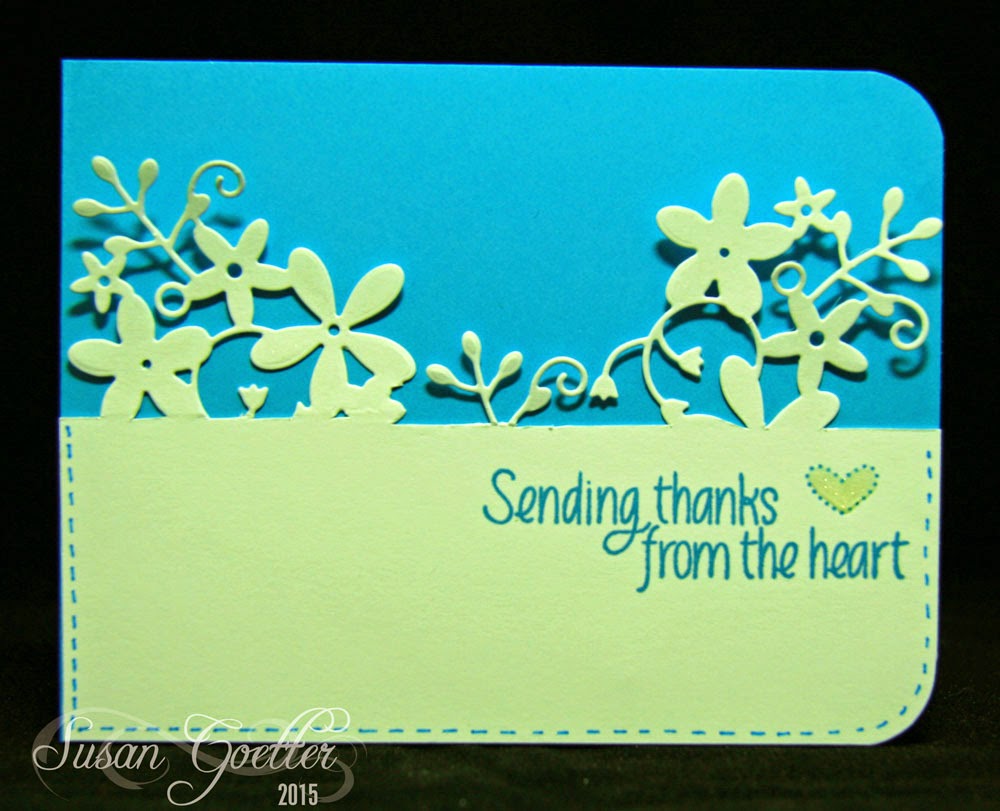 Same idea here, I just adhered it directly to the card base.  Sentiment is also from PTI.

This was indeed a LONG post...so thanks for hanging in there!