It's time for another CASology challenge.  This week's cue card word is: 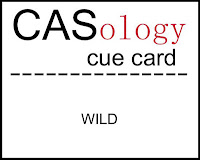 I'll admit this is a tough one for me...as I am not particularly wild...so I really had to do some thinking about this cue word.  I've come up with a couple cards that I hope will be considered as meeting the challenge of wild. 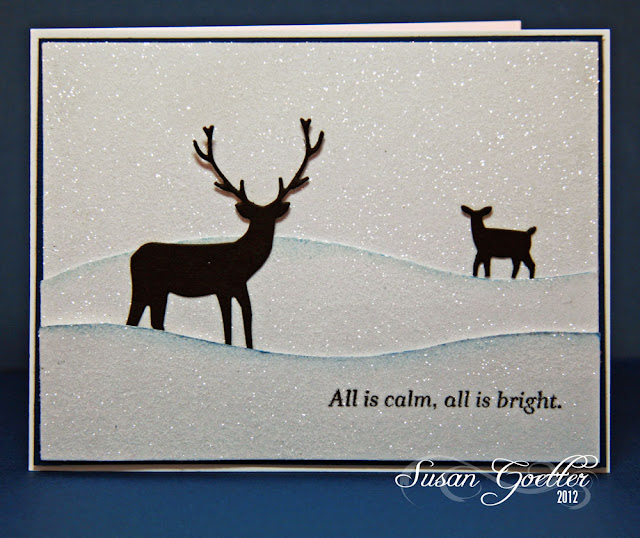 This card is my favorite (and the last one I made)...probably because it is the most CAS.  The deer (Deer are wild...right?) die cuts are from MB and I've had them for quite a while but haven't used them. Shame on me!!  For this card, I cut a white card base 5.25 x 4 inches and ran it through my xyron, then covered it with glamour dust.  I cut two "snow" hills and did the same with each of them.  I used a sponge and lightly inked the edges of the snow hills. The deer were cut from black card stock.  The sentiment is from PTI (a stamp that I cut apart) and stamped in Archival Ink (over the top of the glitter).  I layered all the white pieces together, adhered the deer and then added thin strips of black to the edges of the white background and adhered it to my card base. The description took longer to tell than the card did to make.  LOL!  I think this card also qualifies for the St. Luke's Charity Cards Challenge too! 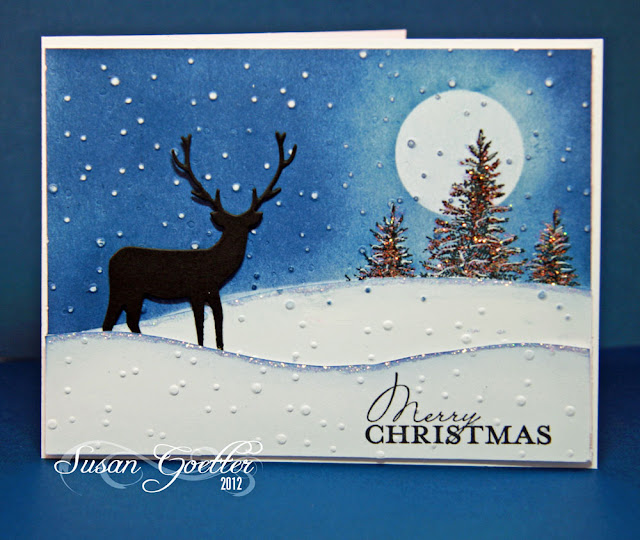 This is the second card I made for the challenge.  Used the deer die cut from MB.  I can't remember where I got the tree stamps, but I do love them.  I've used my "snow" embossing folder again (love that thing!!).  I stamped the trees on a scrap of paper to get the shape of the hill I needed, then used the negative to mask off the sky and a circle to mask off the moon.  I inked the sky, removed the mask for the moon, stamped the trees, and then embossed the panel with the snow EF.  The front snow hill was a separate piece of paper and was also embossed with the EF.  I added a touch of glitter and ink to the snow hills and to the trees.  After I finished it, I decided it was probably not CAS enough for the challenge, but thought I'd post it anyway. 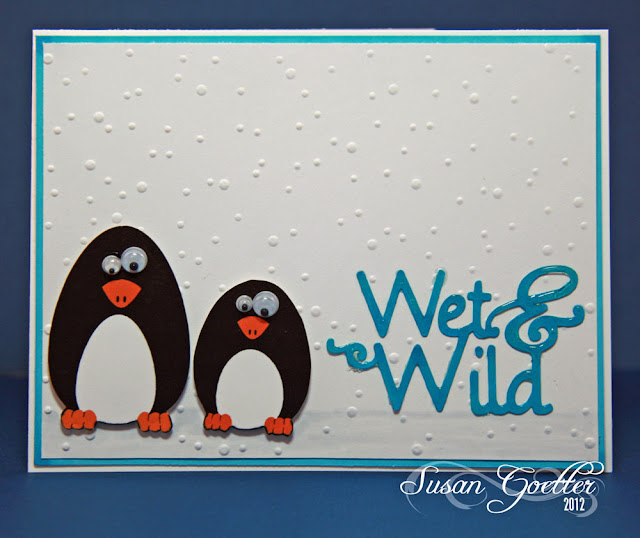 This is actually the first card I made for the challenge, and wasn't happy with it at all.  I think it's probably because I couldn't figure out "WHY" I would send a card that says "wet and wild" to anyone...I guess I like for my cards to have a reason or purpose.  The penguins were cut with the Cameo.  I added googly eyes.  The sentiment was also cut with the Cameo.  I used the snow EF again....are you tired of it yet?

Guess that's it for me right now.  Thanks a million for stopping by!  I truly appreciate your comments, and hopefully, I'll be making the rounds to see all of your fab creations (if my crazy life slows down a bit!!  Until next time....

That's the calmest 'wild' card ever! But I get it! I also love the uneven eyes on the penguins! Thanks for getting wild with us at CASology this week!

all three cards are fantastic, susan!! the last one really made me chuckle! the penguins are too cute! so glad you played along with CASology!!

Wow! I love those sparkling snow drifts with the deer! And what a perfect sentiment! And the second card is beautiful even if it isn't super CAS. It's still uncluttered and I consider that a version of CAS. Probably nobody would agree with me on that. And the penguins are adorable with their google eyes. I'm not a bit sick of that embossing folder and wonder where I can find one!

Wow, Susan...once again I am in awe! I love the cute penguins and the deer out in the wild. The second card is STUNNING! The depth, the layers, the glitter...what a heavenly card!

Okay, yeah, I'll play along with your declaration that you aren't particularly wild. Uh huh.

Dang, Susan, I ADORE your snowy deer scenes. Truly works of art! (I must get that snow EF even tho I don't make many Christmas cards.)

And ANY girlfriend would love that wet and wild card, with a zippy happy birthday sentiment inside, IMHO! I think it's adorable and love the mismatched googly eyes!

Have a great weekend; hope it's not too busy for you to craft!

Three delightful cards Susan. The first one is glittery gorgeous and it was brave of you to stamp on top of the glitter card: the second is equally lovely - the night sky and trees make is very atmospheric. The third one made me giggle........love the way you've given the penguins odd sized eyes. Fantastic as ever. Certainly not fed up with the snow e/f.........hoping mine will arrive today!

Absolutely love your cards Susan and my favourite is the middle one.
luv
Debby

I think your set of "wild" cards are just fabulous! I love the first one, so serene. They are perfect for our Simple Christmas card challenge - thanks so much for playing along with St Luke's!

wow these are all so stunning!!! I LOVE all of the glitter in your first card and the beautiful snowfall in the second, simply wonderful!!!

Wow! Beautiful wintry creations...loving all the sparkle and snow. Of course, deer are wild. :-) Your wet and wild card is so much fun. Wonderful creations!

Lovely cards Susan...just love those penquins eyes! Thank you for joining in our challenge over at St Lukes

Susan all of your cards are just beautiful. Thank you so much for joining us this week at CASology!

These are all wonderful Susan! The really CAS deer one is my favourite and isn't it funny that 'the wild' can be so tranquil looking?! Love the busier deer card too and your whacky penguins made me chuckle!

Three gorgeous cards, Susan! The first two are stunning and I love the google eyes on your penguins. Thanks for playing along with CASology this week!

All three cards are great ... I particularly love the penguins, the eyes are fabulous! Anita in France

Love, love, LOVE how you created three different cards with different takes on the cue word! The first two are so beautiful and serene. The second one is just plain ole FUN! :) I love the different sized googly eyes you used! Too cute! Thanks so much for joining us at CASology!

What beautiful Snowy landscapes Susan... the trees and sky look amazing on the second card, fun penguins too... can't resist googly eyes!! :0)
Thanks for joining us at St Luke's this month :0)
Jenny x