The challenge this week over at CASology is to create a card using the cue word "School".  Since I don't have little ones....or big ones for that matter...in school anymore, I had a bit of difficulty with this one.  But, it is a challenge, so I accepted the challenge and gave it my best shot. 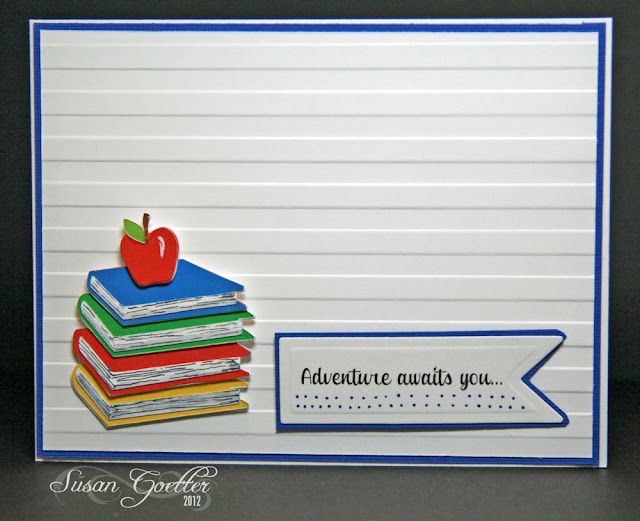 I know...not my best work...but it IS school related!  The books and apple were cut with the Cameo (have I mentioned that I love my Cameo?!)  I cut several of each image and glued them together to get more dimension.  Then I added just a small touch of Copics white paint (love this stuff).  The tag was generated on the computer, added a few dots with a blue pen, then cut the tag with a Spellbinder die.  The panel behind the books was embossed with a SU embossing folder (it made me think of lines on a chalkboard).

That's all for right now. Hop on over to CASology and check out the other fabulous cards!   Hope to see you again soon!  As always...thanks a million for your comments...they are much appreciated!  Until next time....

These back to school cards have stumped me. I never thought of sending back to school cards and don't quite know who to send them too. Hmmm! I've evidently missed something. I love your stack of books and the bright, primary colors are perfect. I got my Photoshop and it's loaded. I'm hoping for some uninterrupted time this weekend to figure some of it out. Thanks for your recommendation.

Susan, this card is so pretty! I love it. So many people are raving about the Cameo. I guess this could be on my Christmas wish list! What are the biggest pluses of the Cameo?

Loving all that white space and the pops of primary colours! Thanks for playing along with CASology this week!

Love your card, love that embossed background. Thank you so much for joining us at this week at CASology!

Your card is so cute, hugs x x

Great interpretation of the theme - I hope you'll link up with 52 Card Pickup this week!

Love the embossed background, the adorable stock of books and the fun sentiment! Thanks for playing along with CASology this week!

you are a bit too hard on yourself, susan... this card is fantastic!! love the scored background... such a fun detail! thanks for playing along with CASology.

Thanks for adding Anonymous, Susan. I hope it doesn't harvest bushels of spam.

Your scrapbook layouts are always such fun because they have LOTS of photos.

I LOVE this card, so great for so many occasions! Thanks for sharing it.