Got another twofer for you today...This card works for both the LIM 241 (wishing) challenge and the One-Layer Simplicity Challenge.

I have a granddaughter who will soon be turning 6, so I made this card just for her. 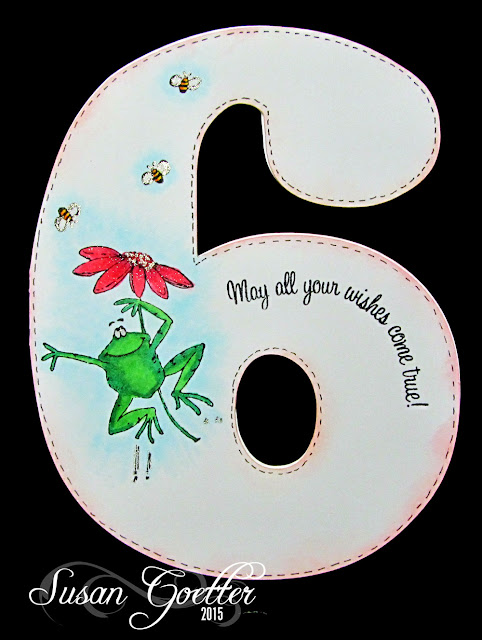 I made the card shape with my Silhouette and welded the number 6 back to back so that it would have a fold on the left hand side.  I stamped the frog (Penny Black - Toadily) in black memento ink and colored it with Copics.  The sentiment is from a very old Technique Tuesday birthday stamp set. I used my MISTI to get the sentiment to curve around the edge of the six.  I inked up the edges of the six with some pink DI.  The little bees are also from the Penny Black set and I used a clear star glitter pen to highlight the wings of each of the bees.

I've been really busy for the past few days creating a baby shower invitation for the daughter of one of my friends. The design for the invitation is from the Silhouette store. 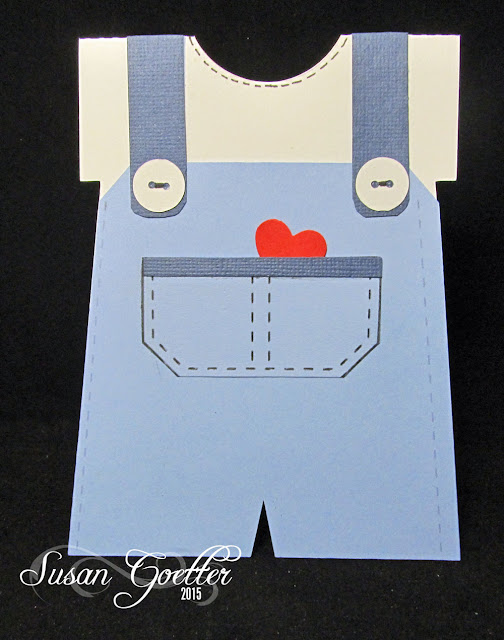 I printed the inside of the card (shown below) on my laser printer, then cut the white card base with the cut file from the Silhouette store.  Then I added some black lines on the overall sides and printed out those lines on blue card stock before cutting with the Cameo.  The pocket I designed in the Silhouette program as the original file shows two pockets on the overalls.  I was trying to simplify the piecing.  I added a strip of the dark blue card stock to the top of the pocket, then inserted a red heart into the pocket.  I also cut the dark blue tabs and all the buttons with the Cameo.  It was several hours worth of cutting on the Cameo, but it saved me HOURS (if I had had to cut it all by hand!). 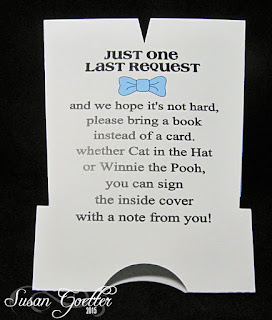 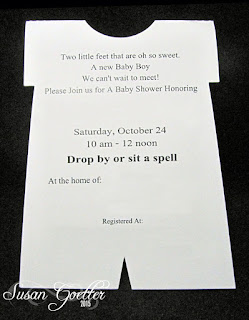 The above left photo is the inside top of the card and the right photo is the shower information. (I blanked out the personal info).

I think they turned out really cute.  I had to make 75 of them so I had to get a great assembly line going with the piecing!  Fun stuff...but glad to be finished with them!

Oh these are both so adorable.and great ideas.
Linby x

Such cute and fantastic cards Susan and I love the one layer number 6 - that's one clever take on a one layer card with such a cute image and sentiment. thanks so much for sharing and taking part.
Sarah xx
Less is More

I love that 6 with the delightful frog and the little bees! And the baby shower invitation is awesome!

Faith A at Daffodil Cards said...

A lovely 6 year old card such a happy image on it too.

As for the Shower invitations, WOW I'm glad I didn't have to do them, they are a great design, beautifully done.

These made me smile Susan, they are SO cute!
Thanks so much
Chrissie
"Less is More"

What a great take on one-layer Susan and a fab creation. Birthday wishes to your grand daughter
Thank you for joining us
Anne Less is More

I love your OLC. Such a great creation and so fun for a six year old.
Thanks for sharing with us.
Anita x
Less is More

We've done that with our book club - each member bought the new baby a book. Very appropriate and fun, I think! Love your shaped number card - so glad you joined us at OLS, Susan!

Love both of your cards, Susan!